Apple CEO Tim Cook appeared on Good Morning America earlier today to discuss topics surrounding iOS 11, taking place a few hours ahead of the software update's launch later this afternoon. One of the major topics of the conversation Cook had with Robin Roberts centered upon augmented reality and ARKit, which will introduce advanced AR features onto compatible iPhones and iPads.

As he has in the past, Cook talked excitedly about augmented reality, explaining that the AR features of iOS 11 are a "huge" addition to the iPhone and iPad ecosystem and will be "unbelievable" for users. 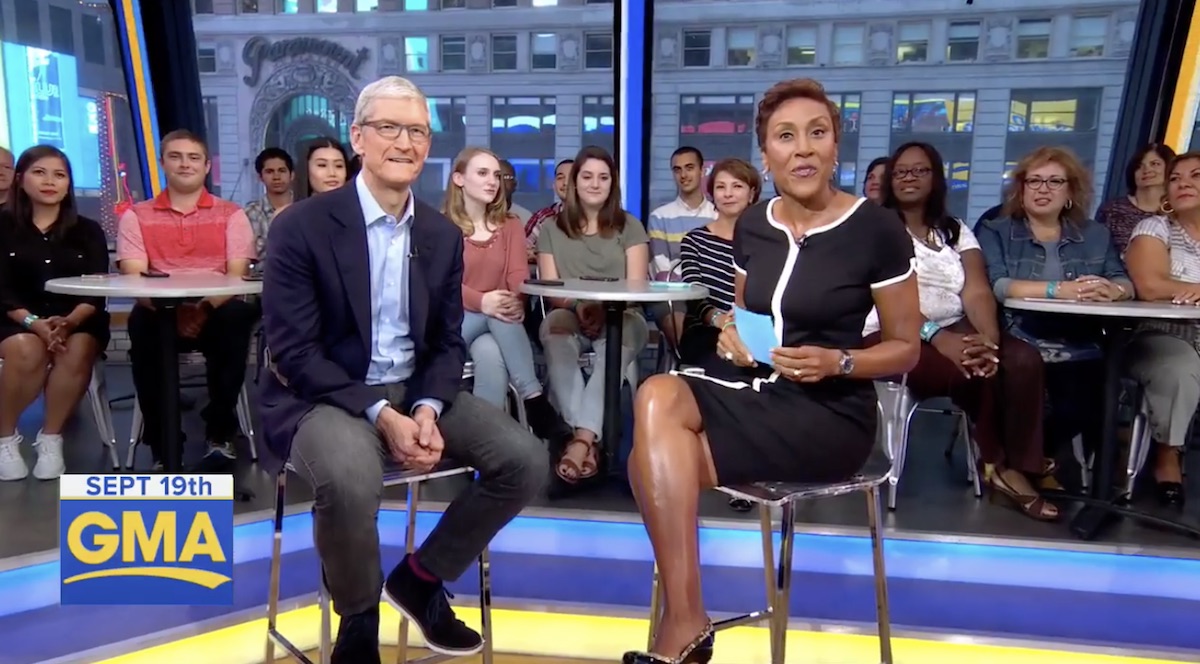 "Well this is huge because it's the first time that hundreds of millions of customers will be able to use AR for the first time. So we're bringing it to mainstream, if you've got an iPhone 6s or later, you have augmented reality today."
Click to expand...

Roberts then pointed out that AR has been around for a long time before Apple began to work on the technology, and Cook responded by explaining that the company is "taking the complex and making it simple," with the help of the ARKit developer framework.

Cook capped off the discussion of iOS 11 and ARKit by calling today "a day to remember."

"This is what Apple is so fantastic at. We want everybody to be able to use AR, and so we've taken the complexity that developers would normally have to do in their apps, and made it simple for them to convert all of their apps to an AR experience. And the thing that is very different about Apple is that, in one day, we can make AR available for hundreds of millions of people. That will happen in a few hours from now.
Click to expand...

​
The interview then shifted to the iPhone X and facial recognition, where Cook reiterated that user privacy and security are not an issue with the upcoming smartphone. "Once you place your face in the phone, it's in the phone, and Apple doesn't have it," he explained, further pointing out that only those you allow access to your iPhone will be able to get the data.

"We're very protective of our customers' data. We believe that privacy is very important in this world, there are hackers everywhere trying to steal your information. We want it to be yours, it is not ours."
Click to expand...

In response to a viewer question, Cook said the cost of the iPhone X is a "value price" for the technology inside of the smartphone. He also said that "very few people" will actually pay the full price of the iPhone at launch, thanks to monthly payment plans that various carriers and Apple itself offers.

Other topics include Cook's response to the potential end of the DACA program, as well as different user questions surrounding Face ID. You can watch the full nine-minute interview on Good Morning America's Facebook page right here.

Pretty sure Sept. 19th will not be remembered by the release date of some random OS.
Reactions: Cameroncafe10a, greenmeanie, Asarien and 55 others
M

We all know that they both need to be game changers.
T

IOS 11 is a massive disappointment, there's not much "new" in it. It's just chalked full of bandades.. Apple needs to redesign the interface, icons don't count fellas. Now moving away from the home button, time to really step up software development!
Reactions: Cameroncafe10a, HJM.NL, Niklas_nick and 14 others

Paying double down for the term pricing is a bad explanation even if it were a good value. Money is money.
Reactions: AstonSmith, HJM.NL, koigirl and 4 others

Apple always had the best marketing in the business. Whether or not the product is useful is another story.
Reactions: Cameroncafe10a, Spizike9, stevekr and 12 others
G

Cook should run for president already and leave the company to true visionaries.
Reactions: Cameroncafe10a, HJM.NL, Spizike9 and 20 others

i'm pretty surprised how half baked iOS 11 feels on my iPhone 7+
Reactions: Cameroncafe10a, greenmeanie, HJM.NL and 9 others
R

bjoswald said:
Apple always had the best marketing in the business. Whether or not the product is useful is another story.
Click to expand...

People will remember how slow their animations got
Reactions: Cameroncafe10a, jjhny, Glassed Silver and 20 others
B

"A day to remember" Is he reciting lines from Independence Day?!
Reactions: Icaras, jjhny, lyngo and 6 others

Today we be remembered as a new software that slows down everyones phone and makes it buggy
Reactions: HJM.NL, stevekr, JosephAW and 6 others
U

Apple is really doubling down on their PR push. They’re worried about the public’s perception of Face ID.
Reactions: stevekr, ackmondual, simonmet and 2 others

I think today is magical personally
Reactions: DeepIn2U and fourthtunz

NO!
...
Now Tim Cook being fired or stepping down... That WOULD be a day to remember!
Reactions: Cameroncafe10a, HJM.NL, stevekr and 18 others

I would have to agree with him but in a bad way.
Reactions: nt5672

Yea I’ll remember it as the day they actually made iOS worse. I’m referring to the pointless removal of 3D Touch multitasking and the wishlist in the App Store.
Reactions: denguydj, Feyl, ackmondual and 2 others

Oh, it's a day to remember, alright. Where all my kids' 32-bit apps got the boot. Great job nuking childhood memories, Tim.
Reactions: Jynto, stevekr, ackmondual and 8 others

globalist said:
Cook should run for president already and leave the company to true visionaries.
Click to expand...

His skin isn't thick enough to be president.
Reactions: stevekr, jjhny, macs4nw and 4 others
X

Darth Vader said something similar, and we know how well that turned out for the Death Star..
Reactions: jjhny, nt5672, ackmondual and 7 others
T

I think these news shows, even if they are just light-news, should be embarrassed to just be commercials for a company trying to push a product.
Reactions: stevekr, simonmet, robeddie and 4 others
B

I know the hyperbole at Apple is not new and idk about you guys but I'm getting tired of it. They actually need some exceptional products to back up these statements.
Reactions: Cameroncafe10a, koigirl, stevekr and 16 others

Yeah with downpayment you don't pay the full price, right? What a sleazy car salesman type of argument. Honestly the galaxy S8 is 650 USD and the iPhone 8 is 1050 USD where I live. The x much more than that. They are taking the piss.
Reactions: Cameroncafe10a, Jynto, greenmeanie and 19 others
You must log in or register to reply here.
Share:
Facebook Twitter Reddit Email Share Link
Register on MacRumors! This sidebar will go away, and you'll see fewer ads.
Sign Up
Top Bottom