Days after celebrating his tenth anniversary at Apple's helm, Tim Cook is poised to receive a whopping $750 million of Apple's stock this week as the final installment of his pay deal with Apple, put in place over a decade ago when he took over the company, Bloomberg reports. 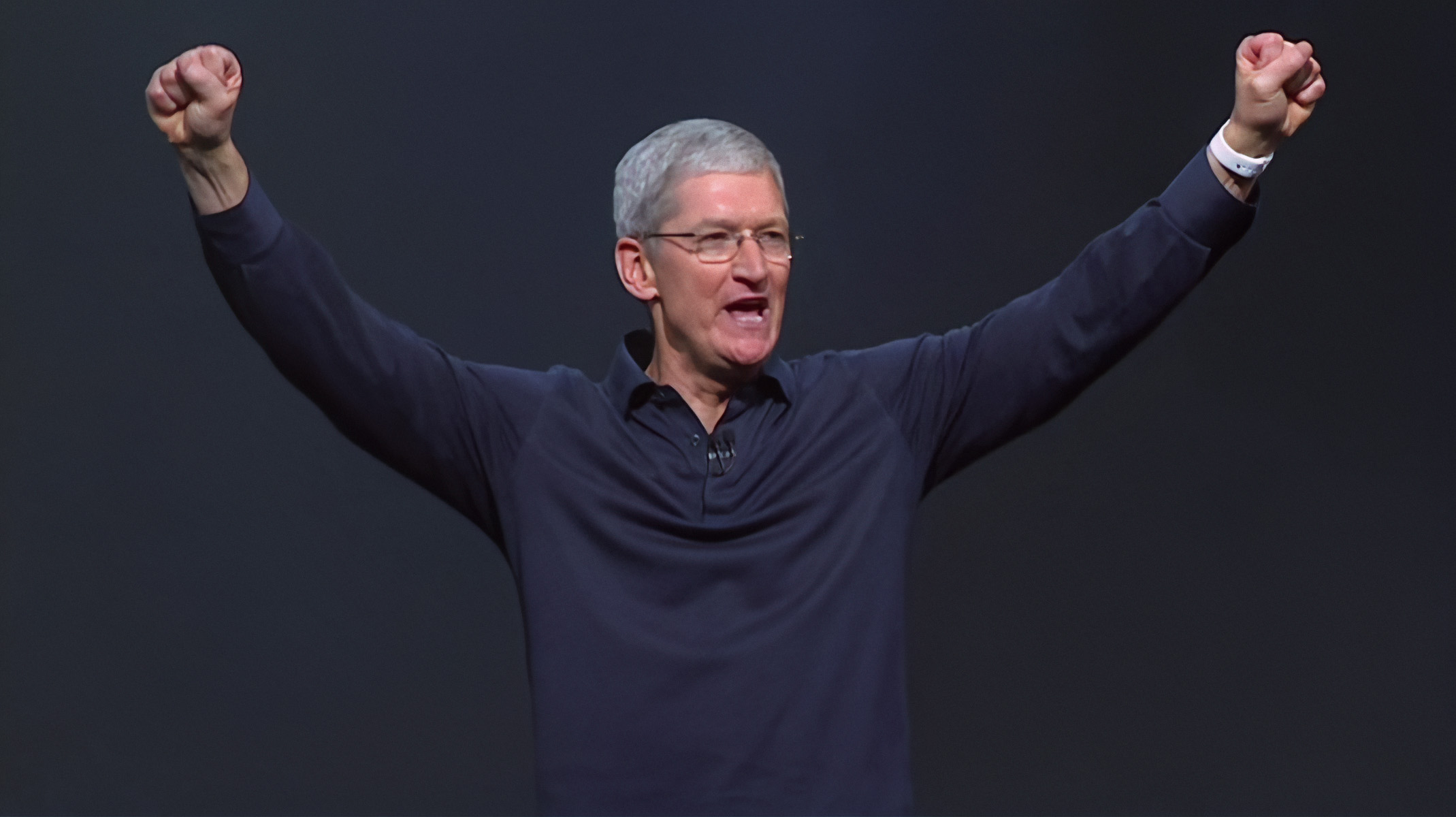 The installment will consist of 5 million shares of Apple's stock, equating to be around worth $750 million, according to Bloomberg. Last year, Cook received restricted stock units worth up to $114 million, ensuring he'll remain CEO until at least 2025.

Cook, aged 60, has a net worth of roughly $1.5 billion according to Bloomberg's Billionaires Index. Though a billionaire, Cook's compensation for 2020 was among the most modest compared to other high-paid tech CEOs. In 2020, Cook received $14.7 million, according to SEC filings.

The CEO has said in the past he donates a portion of his salary and compensation to charitable organizations and plans to give most of his wealth away.

Article Link: Tim Cook to Receive $750 Million Worth of Apple's Stock This Week

I couldn’t fathom being given $10k - he must have some incredibly talented accountants.
Reactions: iScone and Huck

Lol, perfect image. Time to pass it off to a successor soon?
Reactions: willchris, Violet_Antelope, minik and 9 others

time for him to go.
Reactions: Dark_Omen, kaneda, bdart2 and 38 others

Wow! Well deserved! Good job Tim. But can we please get a new CEO now.
Reactions: Dark_Omen, behdadOS, Mikkis and 23 others

As a sideline, Tim could probably fund his own space programme.
Reactions: sydneysider88

That is such a good image choice, @samifathi ?

The way his shirt blends in with the background makes him look like he's supposed be chroma keyed, though.

ah.. ok. we are all placed in the same box in the end. Maybe once this guy is finally out apple can be creative again and a company people could look up to again for creativity.
Reactions: CharlieBoyWoof, CasualFanboy, Scoob Redux and 21 others
B

I support Cook as CEO but I have to disagree. I don't think paying one man such an insane sum of money is ever deserved. I'm glad he plans to give most away though. He's certainly doing much better than other wealthy CEOs in that regard.
Reactions: Termy, CarpalMac, pratikindia and 41 others

Same day as speculation that the cost of the iPhone 13 will be higher this year!
Reactions: NARadyk, kaneda, behdadOS and 19 others
P

Just a amazing guy!
Reactions: scvrx, DelayedGratificationGene, lpc2 and 5 others

That’s a grotesque amount of money for one person to have.
Reactions: S G, TheSkywalker77, Termy and 48 others

AngerDanger said:
That is such a good image choice, @samifathi ?
Click to expand...

He might be able to retire early! Hopefully Apple is ready to move on.
Reactions: Dark_Omen, scvrx, SqlInjection and 5 others
B

TheYayAreaLiving said:
Wow! Well deserved! Good job Tim. But can we please get a new CEO now.
Click to expand...

Make up your mind! If it’s well deserved…he’s doing a great job. If he should be replaced…then, he’s not doing a good job.
Reactions: NARadyk, TheSkywalker77, Dark_Omen and 23 others

Just another ivory back scratcher to him. But at least he can now afford the extra, extra fancy potato chips.
Reactions: willchris, pianostar9, dabotsonline and 1 other person

Now he can retire and work only in his political causes!
Reactions: kaneda, bdart2, scvrx and 11 others
F

RIP OFF!
Steve Jobs worked for a whole lot less and ran the company so much better.
Steve Jobs was reported to be taking as little as $1 a year salary. He was compensated in Stock.


When Jobs sold NeXT to Apple in 1997, he received 1.5 million Apple shares. But he sold them to protest the company's appointment of Gil Amelio as CEO only a few months later. Plus, from 1997 to 2011, Jobs made an annual salary of just $1 at Apple.
Reactions: CharlieBoyWoof, scvrx, willchris and 10 others
I

I just don't like what Apple has become as a consequence of his excellent execution of that job.
Reactions: tylertc04, fishmongerer, scvrx and 6 others

It has even increased in value, because I remember a decade ago the vested amount was supposed to be 600 million. He really has worked for it though.
Reactions: CasualFanboy, valleian, SFjohn and 7 others
N

Great choice of pic. Now do your job, Tim, and get rid of this CSAM disaster that’s tarnishing Apple’s reputation for privacy.
Reactions: NARadyk, TheSkywalker77, CharlieBoyWoof and 14 others

Well I guess he can finally buy me dinner.
Reactions: cpnotebook80

Freeangel1 said:
Steve Jobs was reported to be taking as little as $1 a year salary. He was compensated in Stock.
Click to expand...