Earlier this week at its media event, Apple announced that it would be partnering with rock group U2 to offer its new "Songs of Innocence" album to 500 million iTunes customers for free. However, the deal upset some users who did not want the album added to their accounts or automatically downloaded in some instances. Now, Re/code reports that the album has been downloaded over 2 million times by users just three days after being made available. 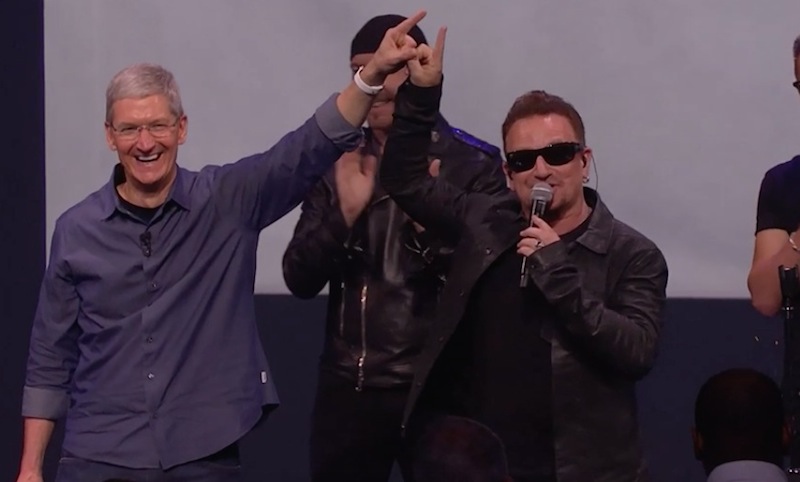 The move was part of an estimated $100 million deal between U2, Apple, and Universal Music Group, as reported by Billboard Magazine this morning. U2 manager Guy Oseary said in an interview with the magazine that the deal between the band and Apple was a "long-term relationship" while shooting down criticism that the deal was disruptive to the of rest music industry.

The deal has also been very beneficial for U2's back-catalog on iTunes, as 17 of their prior albums are currently on the iTunes Top 100. U2's "Songs of Innocence" will be available to download for iTunes customers until the middle of October.

Promotion or shoving it down our throats?
F

2 million? isn't that kind of small?

I don't know if it's just me, but I had to physically download each song instead of being able to just download the album.
N

I wonder what percentage of those were iTunes automatic downloads.
B

2 million seems low, 0.5% of all subscribers

british press are enjoying slating apple for this

They should have just promoted it on iTunes store and sent some emails or push notifications. Not sneaked it in to peoples "purchases" or iCloud download music.
Last edited: Sep 12, 2014

Yea that would be easy since it downloaded automatically...
V

That's because Apple added it to people's purchased items and many people have auto-download turned on.
I

Dekema2 said:
I don't know if it's just me, but I had to physically download each song instead of being able to just download the album.
Click to expand...

Oh yes there is. Just don't force unwanted promotional material on them.

keterboy said:
Yea that would be easy since it downloaded automatically...
Click to expand...

Vanilla Face said:
That's because Apple added it to people's purchased items and many people have auto-download turned on.
Click to expand...

Did it download automatically or is that an assumption? It didn't for me, and I have auto-download turned on.

Hard to imagine that less than 2 million out of 600+ million iTunes accounts have auto-download turned on.

I probably misspoke haha, I meant I tapped each song. Physically downloading? Packet capturing? I don't know about any of that. Maybe I'll switch my major to Computer Engineering (I actually want to)!
M

Didn't show up for me, not even by the next day. I had to go to the store then into the purchases tab to finally be able to click and download. And even after it was on one of my macs, it still didn't appear on another that was (supposedly) synced with iTunes match. Even in the iTunes store the album showed up but showed as "purchased" with no way to download there.

Nice to get a free album, but it sure didn't give a good impression of Apple's ability to roll out something like this seamlessly. Definitely not "it will just appear in your iTunes library!" as they claimed in their hype.

I downloaded a copy out of curiosity, but I agree they should not stuff it in your 'purchased' list. Rather send me a mail or iMessage with the download link if I want it.

Well, having over a hundred megs of content you don't necessarily want download automatically could be an issue for people, particularly those with limited data plans. For a special case like this they probably should have figured out a way to have it be an exception to the automatic download and just make it visible as available for download.
R

Dekema2 said:
I don't know if it's just me, but I had to physically download each song instead of being able to just download the album.
Click to expand...

There should be a 'download from iCloud' symbol right at the top of the page on the album view, above the first track, which will download the whole album.

I know it was free, so take this with a grain of salt, but Taylor Swift's Red album sold 1.21 million copies in the first week, which was the most since Eminem's 2002 album "The Eminem Show." The U2 album has only been out for 3 days.

Not sure what all the negative press about this is about. Sure it's in your purchased tab, but come October 13th it'll no doubt remove itself if you haven't chosen to download it already.

I chose to download the album as I'm partial to a bit of U2. If you haven't downloaded it yet, panic not...you're not missing out.

I agree, the whining is pretty lame. If your biggest problems are someone gave you something for free that you didn't want and so you had to "click your mouse" (oh the humanity) to remove it, you must have a pretty spectacular life.
S

i had auto download turned on, i even had it check for downloads and i still had to manually download the album.
C

Doesn't really matter, does it? U2 doesn't get any more or less money for the deal. Less just means that Apple has less bandwidth to pay for. But I agree that it's probably not worth boasting about when looking at the ratio of downloads to active accounts.


HvLee said:
I downloaded a copy out of curiosity, but I agree they should not stuff it in your 'purchased' list. Rather send me a mail or iMessage with the download link if I want it.
Click to expand...

But then people would complain that Apple is spamming them via email and/or iMessage. Or complain that they didn't get the link at all. Just's no pleasing everybody.

It's a phenomenal album. I highly encourage anyone who considers themself a music lover to listen to this record. It's free and entirely in the cloud, so what do you have to lose?
You must log in or register to reply here.
Share:
Facebook Twitter Reddit Email Share Link
Register on MacRumors! This sidebar will go away, and you'll see fewer ads.
Sign Up
Top Bottom