Even before the iPhone launch on Verizon earlier this year, the carrier had announced that the unlimited data plans being offered with the device were a temporary program, set to be discontinued as soon as this summer in favor of tiered data packages.

Just two weeks ago, Verizon confirmed that it would be dropping the unlimited data plan in July, with leaks pinpointing the new data plans and a debut date of July 7th. Existing unlimited plan subscribers were said to be grandfathered in and thus able to keep their current plans after that date, even after upgrading their devices.

Fierce Wireless now reports that Verizon has confirmed the new offerings as previously leaked, with the new plans indeed set to go into effect this Thursday, July 7th.

Verizon has also confirmed that existing customers on the unlimited plan who upgrade their devices on or after July 7th will be able to keep their data plans.

Both Verizon and AT&T have confirmed that they are also looking into rolling out shared data plans across devices, following the lead of other international carriers already offering the plans. Under those plans, customers can draw from a single data allotment using multiple devices such as an iPhone and iPad, but Verizon and AT&T have yet to announce specific timeframes for rolling out such plans.

So glad I made the decision to get the iPhone with unlimited data while I could. I'd rather have the iPhone4 with unlimited than the 4S or 5 (whatever you want to call it) with a monthly limit.
Comment

Verizon should have thought about these plans.
How are they going to convince anyone to get off their unlimited plan and drop to the 2GB plan for the same price
Comment

Booooooo! Maybe Sprint will go from true unlimited to a tiered one as well. If cell phone companys can cap their data so easily...how much longer until all the ISP companies do it?
Comment

AT&T also has a 4GB plan for $45 a month. (including tethering)
Comment

i'm not a hundred percent, but i think they differentiate between smartphone data plans and feature phone data plans. so i think jumping from a regular phone to an iphone would require a change in plans.
Comment

tehreflex said:
Booooooo! Maybe Sprint will go from true unlimited to a tiered one as well. If cell phone companys can cap their data so easily...how much longer until all the ISP companies do it?
Click to expand...

I hope Sprint doesn't do data caps ... that's why many people are with them. If they chose to be as greedy as AT&T/Verizon, they're going to lose customers. Sprint is known for not raping your wallet, so they should keep it that way.
Comment

wordoflife said:
Verizon should have thought about these plans.
How are they going to convince anyone to get off their unlimited plan and drop to the 2GB plan for the same price
Click to expand...

What makes you think they intend to convince anyone to switch. Moreso, they just plan on forcing new customers to these plans. They won't have a choice.
Comment

outside the crazy house, NC

Data for "feature phones" and date for "smart phones" are two different things.

If you switch from a basic connected phone like the V3M to an iPhone or Android phone you have to change your data package.
Comment
C

Well looks like Apple is helping out Verizon and AT&T new iPhone 5 with limited data...... Possibly end of July since it seems like this is why they didnt announce a new phone back in June!
Comment
P

Those prices are even more disgusting than Canada's Bell and Rogers pricing.
Comment
P

Nope... As with att, on the small plan you get charged the plan cost for the plan amount so youll get raped hard by overages. With att if you go over 200mb they charge you $15 more for 200mb more. Verizons newest leak has $10/75mb when you go over.
Edit: apparently the 75mb plan isnt even available for smartphones so its a moot point

Instead of a constant $30 a month, people who have erratic monthly usage but consistently stay under 2GB will benefit with $10 or $20 data bills sometimes.

Get the unlimited plan now- it includes unlimited 4G when you get a phone that supports it.
Comment

If you switch from a basic connected phone like the V3M to an iPhone or Android phone you have to change your data package.
Click to expand...

You sure? On their website under how much the plans currently cost they show the 29.99 unlimited data as the same thing. This is what makes me thing that it might work 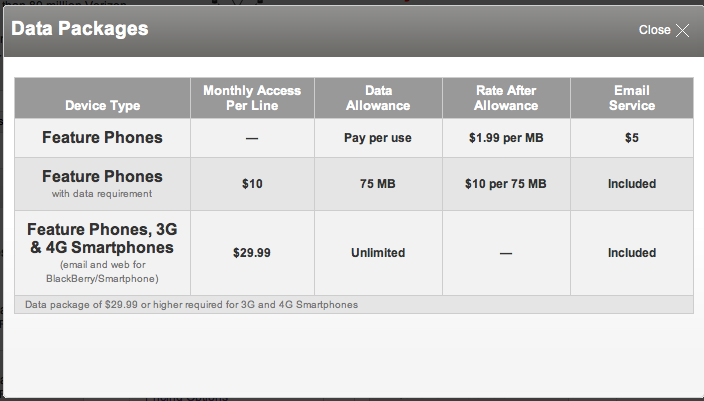 These service providers make me sick. Innovations in technology, and its infrastructure, should be driving costs down for consumers...not the other way around. Total A Holes/
Comment

does this mean we lose the 20 dollar 1gb for ipad?
Comment
M

toddybody said:
These service providers make me sick. Innovations in technology, and its infrastructure, should be driving costs down for consumers...not the other way around. Total A Holes/
Click to expand...

It's the nature of most companies to get away with whatever they can, always pushing the envelope of what's legal and what the paying public will tolerate.

I'm not surprised by what the providers are doing, but what saddens me more are the actions of we consumers who let them get away with it. Instead of dropping services like a hot potato, we, myself included, line up month after month for this. Even while we complain, we pay their outrageous charges just so we can keep sticking the data needle in our veins because we can't live without it.
Comment

Why is everyone complaining about the price? It's actually quite decent for most users when you factor in the overages of $10. I consider myself a fairly heavy user, but with WIFI everywhere, I hardly top out over 500MB, and when I do go over, like on trips, it's always under 1GB.

Everyone should get the 75MB plan, and most will go over and it will only cost them $20 a month. But even if it goes over some months, it will only cost $30, what you would have been paying anyway. So then you save $10 on the other months.

The only people complaining about this are the people that ruin the network streaming videos 24/7 using over 5GB a month, lol. We don't want them on the network anyway! Haha. Most decent users use under 1GB unless there is no WIFI anywhere you go.

SERIOUSLY. Check your data numbers online. I bet you they aren't as high as you think. I used to complain about AT&T nixing unlimited until I realized how low my numbers are, and I run my iPhone out about every day doing all kinds of stuff.
Comment