Apple is set to kick off its 2015 Worldwide Developers Conference on Monday with a keynote event that begins at 10:00 a.m., and as it does every year, the company has begun decorating the Moscone Center in San Francisco where the conference will be held.

As of this afternoon, work crews have begun placing the iconic Apple stickers on the outside of the building, while also preparing to begin erecting banners in the lobby of Moscone West. As can be seen in photos shared by MacStories, the first leaves of the logo are visible.

In a few hours, we'll likely see the first banners for the 2015 event, which may sport the tagline "The epicenter of change." Apple will continue decorating the center throughout the week, adding additional signage both inside and outside.

Oftentimes Apple's banners reveal hints on upcoming operating system changes, suggesting potential names and feature sets, but those revelatory banners will likely be kept under wraps until later this week. In 2014, we didn't see signs for iOS 8 and OS X 10.10 until Friday.

This year's keynote will include the debut of iOS 9 and OS X 10.11, along with a new streaming music service, a revamped version of iTunes Radio, a new Apple TV set-top box, and a rewards program for Apple Pay. For more details on what to expect, make sure to check out our WWDC roundup.

Apple plans to provide a live stream of the WWDC keynote on the Apple TV and through its website. MacRumors will also provide live coverage of the event for those unable to watch, both on MacRumors.com and through our MacRumors Live Twitter account.

Update: The Apple logo on the outside of Moscone West has now been completed and the first interior WWDC 2015 banners have gone up. Image via MacStories. 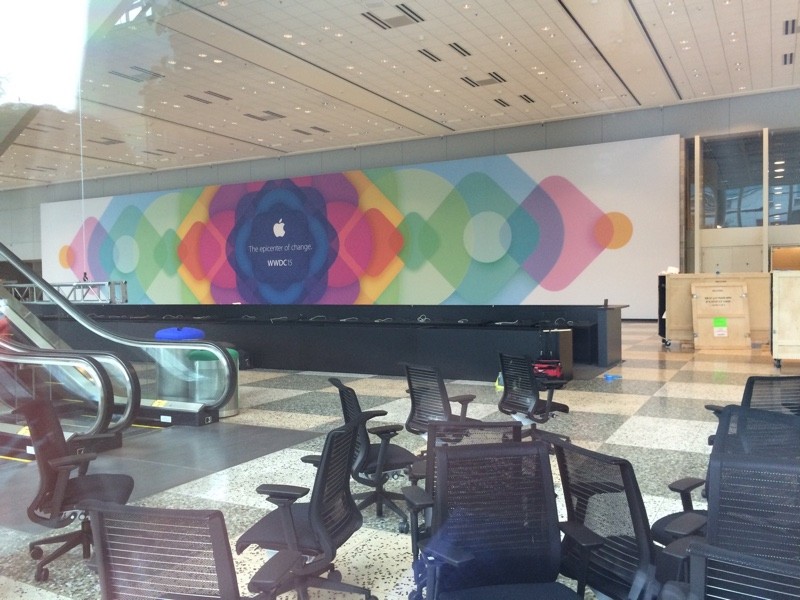 Article Link: WWDC 2015 Decorations Going Up at Moscone Center Ahead of Monday's Keynote

Does anyone know the best place in SF outside of Moscone to watch the Keynote live?
Comment

It does not seem that the pictures or invitation have as many hints as in the past. I miss all the guessing about what hidden messages were in the picture or even the words.
Reactions: toph2toast and iAshley
Comment
J

"It's the most wonderful time of the year!"
Reactions: rjalda100, jsmith189, nortofthe13th and 7 others
Comment

Cuban Missles said:
It does not seem that the pictures or invitation have as many hints as in the past. I miss all the guessing about what hidden messages were in the picture or even the words.
Click to expand...

As I recall, quite a bit of speculation about different things in the thread about the invitation from a little while ago.
Comment

Be on the lookout for the elusive black banner(s)

Cuban Missles said:
It does not seem that the pictures or invitation have as many hints as in the past. I miss all the guessing about what hidden messages were in the picture or even the words.
Click to expand...

They could show up in the next few days though (meaning as the banners show up)
Last edited: Jun 2, 2015
Comment

It's too much for me. 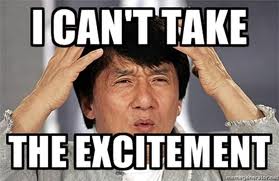 TMRJIJ said:
It's too much for me.

Come on Apple, deliver a streaming service that makes me wanna quit Spotify for good!
Comment

Where are the decorations? I don't see anything?
Reactions: cyberdogl2
Comment

Rogifan said:
Where are the decorations? I don't see anything?
Click to expand...

Banner hanging and decoration services must be down at the moment.
Last edited: Jun 2, 2015
Reactions: iLoveiTunes, Avenged110, mariusignorello and 2 others
Comment
S

Love this time of year!

I also can't wait to see the unveiling of the New Apple TV on my friend's Old Apple TV and the angry look on his face because he just bought it.
Reactions: keatth, rbrian, bliggs and 2 others
Comment

Rogifan said:
Where are the decorations? I don't see anything?
Click to expand...

Very minimalistic approach. Just the stem so far on the left side.
Comment

kmj2318 said:
They're really going for minimalism...
Click to expand...

If you're referring to the white "leaf" my guess is the rest of the Apple Logo is yet to be put up.
Reactions: PowerBook-G5 and Benjamin Frost
Comment