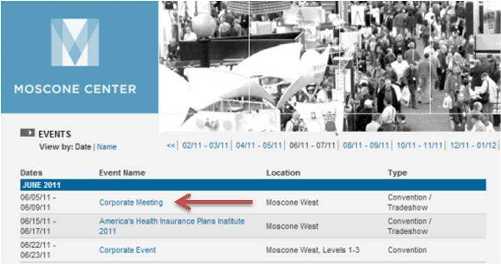 Originally spotted by AppleBitch.com, the possible dates for WWDC this year appear to fall between June 5th and 9th. The Moscone events page shows a "Corporate Meeting" in Moscone West occupying those dates. In the past, such listings have predicted Apple's WWDC event, but not with complete accuracy. Last year, Apple's actual WWDC dates did not fall on the predicted dates.

What is interesting is that the dates do correspond with tentative leaked dates from a San Francisco Convention and Visitors Bureau PDF. Those dates included:

With the rise of iOS and Apple's withdrawal from Macworld Expo, WWDC has become a major event for Apple each year. This year, Apple is expected to feature Mac OS X Lion prominently.

well lion will almost be certain. but a new idevice? i don't think so
E

Man, with all the Verizon iPhone talk and iPad 2 speculation, I'd almost forgotten about Lion. I'm excited to see what the final product looks like. And of course, what would WWDC be without a new iPhone. I can't see Apple not releasing some kind of updated version, even if it's no more than a new processor and RAM/capacity boost.

cant wait for it, although i am more interested in the macbook update unless they plan on doing it all at once since the the intel chips are late this year
Z

MacBOS said:
cant wait for it, although i am more interested in the macbook update unless they plan on doing it all at once since the the intel chips are late this year
Click to expand...

I am definitely not buying any new Macs before Lion. I can't imagine buying a new MacBook Pro or something in April or May, and then updating the OS, Parallels, doing software installs, etc.. a month or so later. It would just seem silly.

Indeed.. hadn't heard of that one before. That b**** website will probably gain some interest.

Really? Seems like they would be more likely to talk about iOS 5/iPhone 5.

Sky Blue said:
Really? Seems like they would be more likely to talk about iOS 5/iPhone 5.
Click to expand...

Sounds like it's going to be one ridiculously long keynote speech.

If true, I'm relieved to hear Mac OS X will be feautured prominently. iOS devices are great but have stolen the spotlight far too long...

ALthough I'm excited about new iOS devices and I'm sure there will be plenty of focus there, it will be great to see the developments of Lion too. Nice to see some spotlight on the Macs. Dying to see something game changing again on the OS or the Macs themselves.

I'm sorry for not knowing this, but what exactly is WWDC?

I am cuckoo over my new MBPro and soon to arrive VZW iPhone, but Mac/Apple is very new to me.

Who goes to WWDC? Is it for everyone? Thanks!

Hope this will be a "back to the Mac WWDC" - I love iOS, but MacOS X shouldn't be the background music.
P

First of all, duh. Anyone could look at the calendar and say it's probably the 5-9th.

Secondly, there isn't much to talk about with Lion. There will be a second preview of the same few features we've seen, followed by an August release date. This will take 15 minutes.

After that, iPhone 5 to steal the show and release date for iOS 5.

Johnny Gilligan said:
I'm sorry for not knowing this, but what exactly is WWDC?

I am cuckoo over my new MBPro and soon to arrive VZW iPhone, but Mac/Apple is very new to me.

Who goes to WWDC? Is it for everyone? Thanks!
Click to expand...

And yes, it is open for everyone who pays
P

It's not, and never has been.

And yes, it is open for everyone who pays
Click to expand...

I predict that the iPhone 5 will be the spot light, and OS X Lion being the "One more thing..."

pmz said:
It's not, and never has been.
Click to expand...

Are you saying it was always centered around iOS

gramirez2012 said:
I predict that the iPhone 5 will be the spot light, and OS X Lion being the "One more thing..."

You have to remember WWDC is the worldwide developers conference, not "show off the new iPhone meet and greet day". It's mostly for programmers. In the past, it's been iPhone-centric, but only because the new iOS always has new developer tools and OSX hasn't seen much change lately. This year things are different. OS 10.7 will have tons of new developer tools (far more than iOS 5) so they will likely focus on that, leaving the iPhone stuff to take a back seat.

Also, since the two are "becoming one" it shouldn't be hard to talk about both of them simultaneously. I'm just saying don't be surprised when it's not the "iPhone event" that everyone is used to.

I'm looking forward to hearing more about Lion, and I wish I could go!
L

Looking forward to see whats next. Lion for sure, new iPhone?

I don't really have much to comment on. Just glad to see a non "phone company related" news story.
S

My first thought. What a terrible name!
N

I hope that LION supports multiple monitors in a much better way. I hate the current design where you can have one app open in secondary monitor but the Menu Bar is located on the primary monitor. LION should move the MENU BAR with the APP...or do what Windows does; each App has their own MENU BAR.
You must log in or register to reply here.
Share:
Facebook Twitter Reddit Email Share Link
Register on MacRumors! This sidebar will go away, and you'll see fewer ads.
Sign Up
Top Bottom