I saw this post on a YouTube video about the new 11's - but they mentioned this NeuralCam app - aka Night Mode Camera.

I am sticking with the XS Max for another year, has another tried this app? It's $2.99, but how are the results. Good, ok..pixelated, a fraud & waste of money? I've tried other apps and I haven't been totally impressed.

The reviews look decent, but sometimes I feel these reviews are generated by the company/developer to boost ratings.

"
How it works:
- Open the app and hold your camera steady for a few seconds as you take the photo.
- NeuralCam captures a varying number of frames and uses advanced image processing algorithms and machine learning to intelligently merge the frames and brighten the colours to obtain a single high-quality image.
- Image processing completes in a few seconds (this might vary depending on your device type).
- The result: a clearer, brighter, sharper, more defined, and colourful image.
- Swipe down on the photo to go back to camera view"
---

List of supported devices and photo output resolutions for the current version:

[doublepost=1568735034][/doublepost]..and I guess I'm about to answer my own question. lol.
I did a hashtag "NeuralCam" on Instagram, also checked out the larger desktop version of these photos.

Whoa, the app just may be worth the $2.99! A nice alternative for those not upgrading to the new phones right now.

Yeah, I've tried it out, works great! The only caveat is there's a slight delay as it takes a few pictures (and you need to hold it steady for that time).
The results are not the same as some of the posted pictures online of NightMode but definitely worth the $2.99 over an expensive upgrade.
Reactions: PhillyGuy72

I gave in and downloaded it. Yeah, it's nice! And I totally agree...not as great as the real new Night Mode results Ive been seeing. But a nice improvement / alternative to older model iPhones..and yes, you're saving a TON of money if your mainly upgrading for the night mode.

I'm using XS Max, it states it can be used on phones as old as the iPhone 6...so I'm not so sure about the results on that 2014 model.

Yep Result is not immediate, it does have to "Process" for 5-10 seconds. I saw the "Hold still" - which I tried my best and the result still looked decent...no blur or distortion. I'll be trying this out some more tonight, I'll use a tripod to see if the result is better. But my first impression is, it's worth the 3 bucks
Reactions: ruslan120

Not bad. I did have some strange sky effects in extreme dark situations after it processed. (Photo below - odd dark area and "halo" effect) But considering the regular camera lens could not pick up anything in the dark park setting, it's cool. Just testing out the extreme dark environment.

In other photos with some light around, it does seem to really bring out that "watercolor" effect of the XS Max camera - you can see it in leaves especially. I don't think that is the fault of the app, the XS Camera always seemed to have this 'watery' look in a lot of photos. Overall, I like the app.

One idea, maybe you can add a timer to this in a future update?
When you choose timer then press the shutter button, it counts down 3, 5 seconds - then it begins the capture.

Various shots. Tripod was used. No adjustments made in any photos. 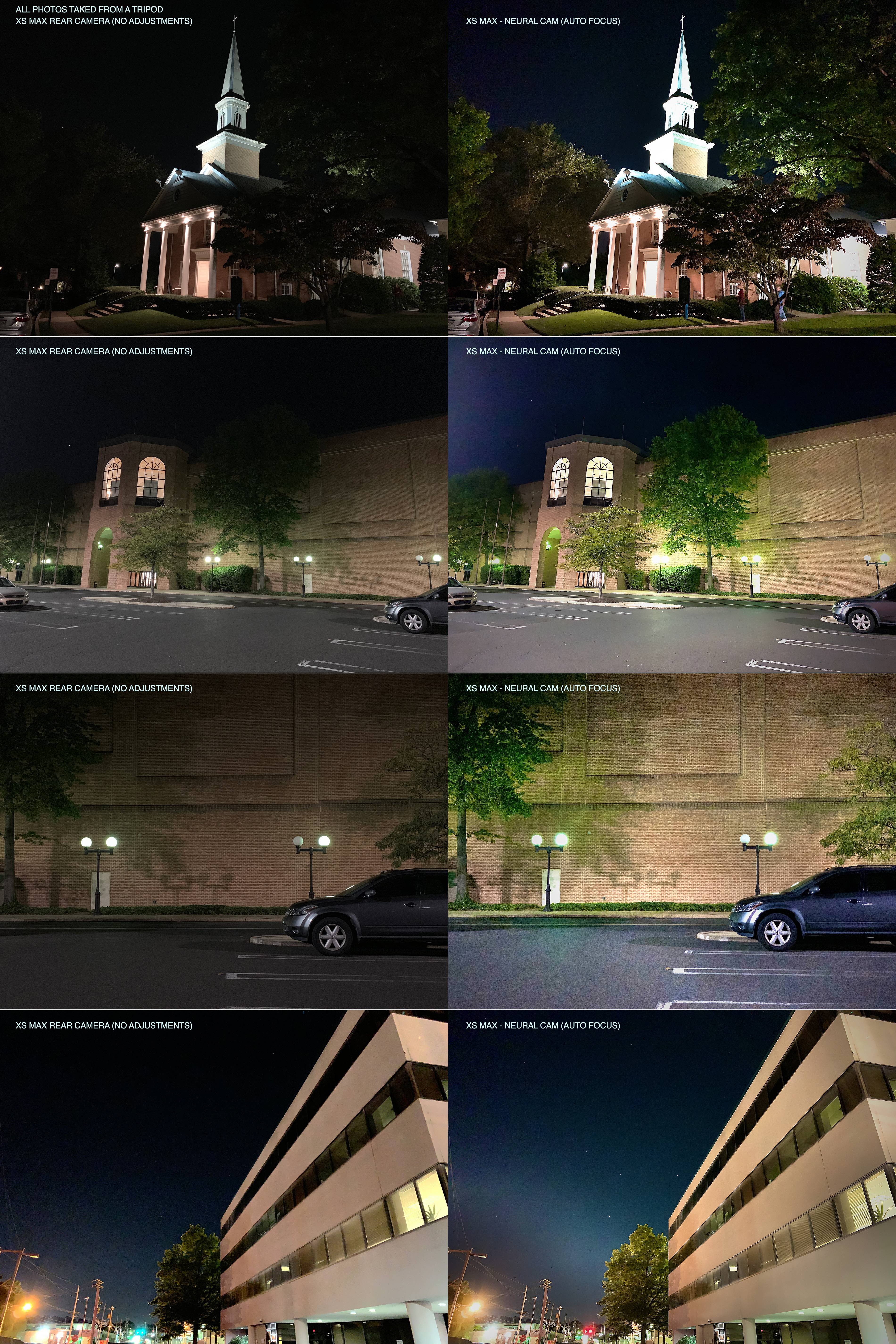 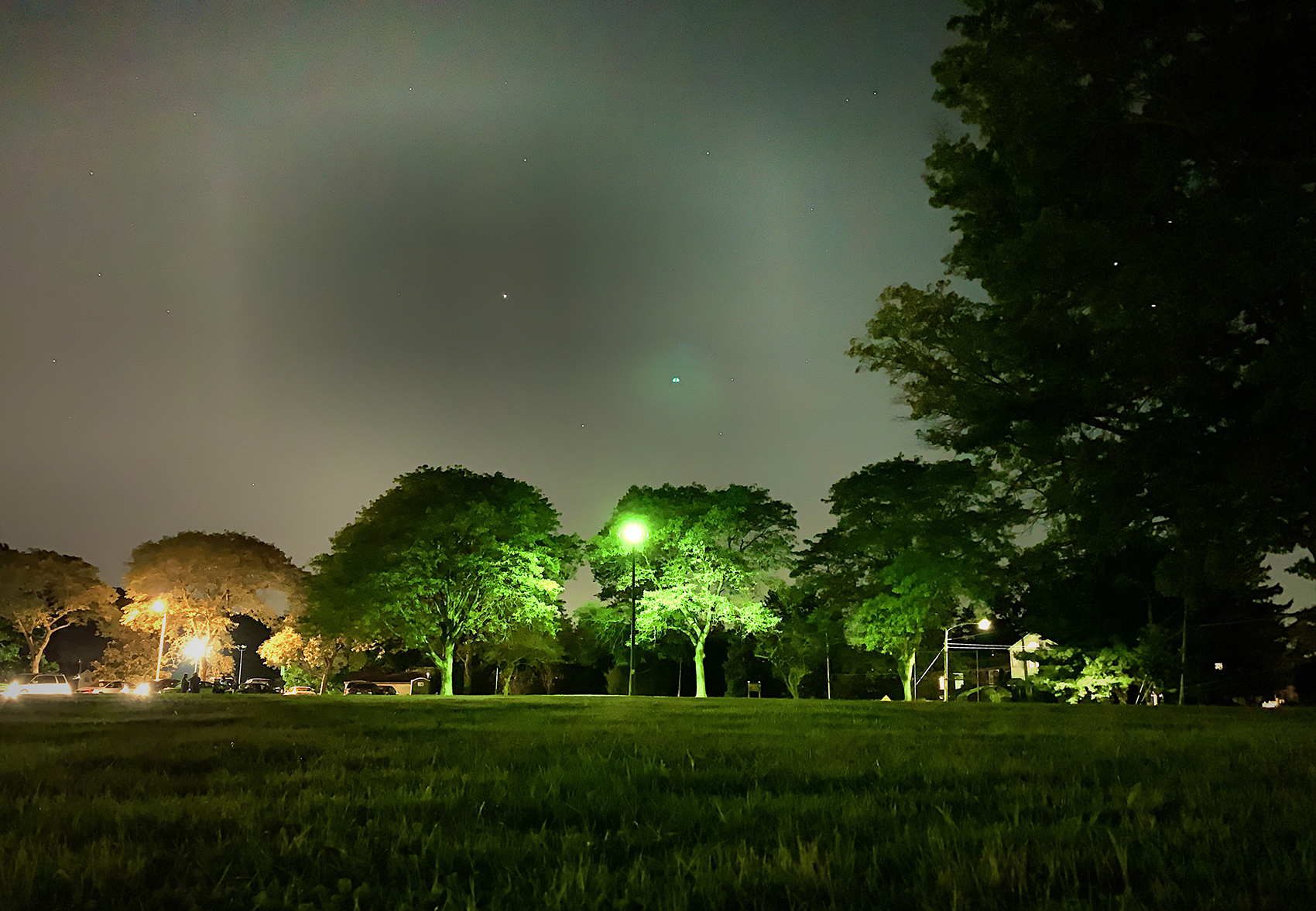 Just downloaded for my iPhone XS. It’s decent enough. App could use a little polish. Could be faster and it does need a timer function. Also be nice if we could use the volume buttons as a capture button like in the native camera app.
Reactions: PhillyGuy72

I think there are better and free alternatives. These samples don't seem to do justice, photos seem to look oversharpened and too fake for my taste, I don't see a change in noise or clarity, it's to the point where it looks like a painting.

alpi123 said:
I think there are better and free alternatives. These samples don't seem to do justice, photos seem to look oversharpened and too fake for my taste, I don't see a change in noise or clarity, it's to the point where it looks like a painting.
Click to expand...

It's not perfect and after using it more, lot of photos do come off like a watercolor, heavy processing and the results are eh. BUT some photos are not THAT bad. Hope to see improvements in future updates...we'll see.

The Photo app featured on the App store right now - Halide Camera looks impressive, has a decent 4.6 overall rating. However the "recent ratings" drop off a bunch. Seems to be buggy, problems with RAW. Perhaps not fully optimized for 13.0/13.1 yet.

Neuralcam went to a subscription model (at a ridiculous price) The features I paid for are now behind the paywall. BS!
Reactions: PhillyGuy72 and ruslan120

Complete and utter bs. I’m taking this video down (marking as unlisted) endorsing this app.

Saw this as well the devs pulling a fantastical move putting features that were once available for PAID customers behind a paywall.

Yep, I saw this also after the update. I am so sick of paying for an app...suddenly they update it - but if you want new features..well you have pay for the (growing money grabbing annoying subscription) It's such a major turn off! And after paying - don't throw ads at me, or have an icon on my screen "Buy Pro Version" SMH!

Forget the greedy money grab, I think this update is messing with my regular iPhone stock camera. I tested the "super long exposure mode" on NeuralCam a few nights -- when, when I opened up my regular iPhone camera..it showed a frozen still image of what I was trying to take, Video other modes simply showed a black screen. (closing the iPhone camera out didn't fix anything)

ONLY "fix" was a hard reboot. I tried it out this NC camera app again and once again the stock iPhone camera/video had the same problem again! I deleted the app...so far so good. Right now, my only guess...since I did not use any other 3rd party camera apps, this Neural Cam was doing something to my regular iPhone stock camera (video, slo-mo, etc) app.

rocknrolldoggy said:
Neuralcam went to a subscription model (at a ridiculous price) The features I paid for are now behind the paywall. BS!
Click to expand...

I saw, it nauseas me. They won't see an additional dime from me.
I cannot stand all these developers pulling that nonsense. One weather app (Hi-Def Radar) I bought a loong loong time ago, my total go to app for storms, lightning strikes, etc.

They switched over to that subscription mode a few years ago in 2016, 2017 - removed a slew of features in the process. They got an earful from many - a 5 star app dropped to 1 stars in a short time - and finally gave into bring back those missing features for those who already paid - but kept new features for those who will sign up for the pricy (once a week fee, or "save $" if you pay for one year) No thanks!
Last edited: Mar 1, 2020

Update: NeuralCam 2.0 - AND removed the subscription model.
*All features available to those who paid for the base app.
Nice, it's not every day developers actually listen to the people!