Google today announced YouTube Red, a new subscription service that provides unlimited ad-free access to YouTube videos for $9.99 per month on Android, desktop and the mobile web, and $12.99 per month on iOS due to Apple's in-app purchase tax (via TechCrunch). The membership also includes several other benefits. 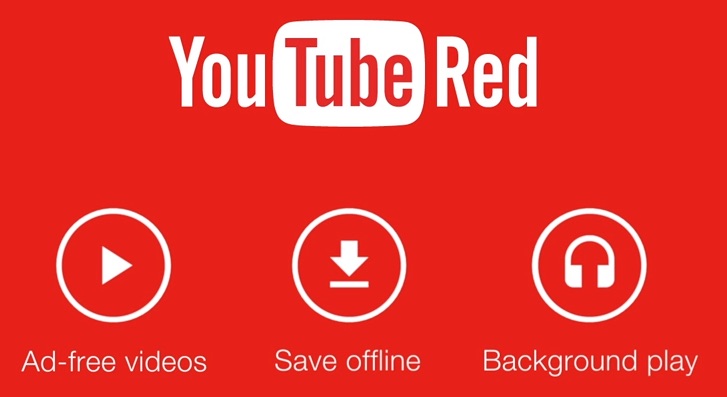 YouTube Red features the option to save videos for offline playback and to play videos in the background on smartphones and tablets. In early 2016, the subscription service will also take on Netflix by introducing member-only access to Original series and movies by some of YouTube's most popular creators.

YouTube Red launches in the U.S. on October 28, and will expand to other major markets over the course of the next year. The service works across all devices and anywhere you can sign into YouTube, including its new Gaming and Family apps. A free 14-day trial will be available in the U.S., which can be extended to 30 days with a credit card.


Google has also bundled a Play Music subscription into YouTube Red on iOS and Android, providing access to both services for a combined $9.99 or $12.99 monthly payment. YouTube Red's unlimited access to both streaming music, videos and more makes it an attractive competitor alongside rivals like Apple Music and Spotify.

The Verge published an exclusive in-depth article and hands-on video about YouTube Red:


Google also announced YouTube Music, an all-new app for discovering, watching and listening to music videos. The app is coming soon in the U.S., followed by additional countries in 2016. YouTube Red members gain additional features such as no ads and other background and offline member benefits.


YouTube will continue to be available in its traditional ad-supported format on the web and mobile devices. Google says today's ad-supported experience will not change for users who aren't interested in paying, while the majority of revenue collected from YouTube Red will be distributed to partners.

Thanks, but no thanks.
Reactions: Lopov Jack, JoeMacDe, Regbial and 14 others
F

Not to be confused with a similarly named adult site...
Reactions: Lopov Jack, JoeMacDe, friedmud and 26 others

Interesting but I will never give Google my money, have an account with them or use their services.
Reactions: JoeMacDe, Gudi, Wondercow and 7 others
C

Making audio play in the background a monthly paid feature is pretty ridiculous...
Reactions: Gudi, mrgraff, Wondercow and 16 others

Remember when you could do background playback with the original YouTube app...no thanks
Reactions: Dennison, xlost6, Benjamin Frost and 7 others
P

Yeah, no thanks. I can get everything (background play, no ads, saving offline) with a jailbreak on iOS and some browser extensions on desktop.

Just one more thing to subscribe to and pay monthly? Pass. All these subscriptions are going to start adding up to more than a cable bill.
Reactions: JoeMacDe, darkknight14, JackANSI and 16 others
W

I would love an ad-free YouTube subscription, if it were closer to $1.99 per month. One wonders what the economics of the situation are. I can't imagine YouTube (and it's associated content creators) are making $9.99 per month off of me as it stands...

I feel as if I'm being "threatened" with ads, rather than being offered an equitable opt-out. "Pay this inflated price or you'll have to spend part of your life watching Colgate commercials!"
Reactions: JoeMacDe, Macyourdayy, darkknight14 and 19 others

jpgr15 said:
Just one more thing to subscribe to and pay monthly? Pass. All these subscriptions are going to start adding up to more than a cable bill.
Click to expand...

And with a dozen different apps to boot.

Apple needs to add the media searching feature/API that tvOS has to iOS. If I can search across iTunes, Hulu, NetFlix, HBO, etc. on my Apple TV, why not on iOS which has those same apps?
Reactions: Mr. Donahue and PowerBook-G5

$10 per month? Are they crazy? Are they promising any original content?
The sad part is, they are going to up the ante on ads to get you to switch.
Reactions: JoeMacDe, Hustler1337, Reikochan and 12 others

Pill up yet another $/month service.
I'm sure that some people have car-payment like monthly cost for apps and on-line services.
Reactions: JackANSI, Regbial, Mr. Donahue and 1 other person
P

rorschach said:
And with a dozen different apps to boot.

Apple needs to add the media searching feature/API that tvOS has to iOS. If I can search across iTunes, Hulu, NetFlix, HBO, etc. on my Apple TV, why not on iOS which has those same apps?
Click to expand...


Zimmy68 said:
$10 per month? Are they crazy? Are they promising any original content?
The sad part is, they are going to up the ante on ads to get you to switch.
Click to expand...

That's fine, my adblocker (uBlock) does a great job of blocking literally hundreds of ads on those...less than legit streaming websites, so it can handle YT easily.
Reactions: JackANSI and GoldenDust
2

A "tax" for iOS? Seriously Google that is so thinly veiled. I don't use Youtube directly now, and certainly won't even think of using it in the future. Plus your app for the ATV is horrible and I hid it a long time ago. Does the app use flash too. lol.
Reactions: Benjamin Frost and mackiwilad
J

Most pointless pay service ever....it's DOA.
Reactions: You are the One, Regbial, dotnet and 4 others

I can do all this for free already.
Reactions: mrgraff, Regbial, Radeon85 and 1 other person

With Adblock it doesn't give you access to Google Play Music which is a competitor to Apple Music but available on iOS & Android.

So for 9.99 you get Ad Free Video AND a Full Streaming Music Service.

It's a no brainer.
Reactions: lars666 and BlacMac
K

So here we are: a service that is filled to the brim with ads decides to offer an ad-free alternative and people complain. This is exactly what web hosts are worried about when advertising revenue diminishes and people say they don’t like ads. This seems like a reasonable price to me, considering what you pay for Apple Music, plus the fact that it costs a lot more bandwidth to stream HD (and even 4K) video. Add to that TV programmes and you have a reasonable price, in my opinion.


Cuban Missles said:
A "tax" for iOS? Seriously Google that is so thinly veiled.
Click to expand...

I agree with Google on this one. Apple is taking a 30% cut even though the app itself is free and Google is paying for all the bandwidth while not getting any advertising revenue from users who pay for the programme. This way they make it clear to the user that Apple is taking 30%. Having YouTube in the App Store is good for Apple too.
Reactions: JackANSI, BlacMac and Bill Killer

Yes it would be but, including an Ad Free Video Service, Full Access to Google Play Music and audio play in background makes Apple Music look pretty pitiful now for the same price.
Reactions: BlacMac
2

RightMACatU said:
Pill up yet another $/month service.
I'm sure that some people have car-payment like monthly cost for apps and on-line services.
Click to expand...

So just for my subscription services (ATT, comcrap, and netflix), all together for a family of 4, I am under $300. So I guess that is equal to a small or midsize car payment.
Last edited: Oct 21, 2015