A good battery for a DLSD PowerBook G4

You are using an out of date browser. It may not display this or other websites correctly.
You should upgrade or use an alternative browser.
1

My DLSD 15" PowerBook G4 came with a battery that I tried many times to revive. No matter how long it was plugged in, the amber charging light only came on occasionally and for about 1 minute. The menu bar said "Battery not charging".

Recently I bought a used battery: it's the after-recall model, and was supposed to have about 4.5 hours of charge still left in it. The seller had removed it from a PowerBook 6 months ago.

Once it arrived I was disappointed to observe the exact same behavior. Amber light comes on when the charger is connected and rarely after, always for 1 minute. The indicator LEDs on the battery do not work. The menu bar tells me it's charging at 100%.

Could this battery have completely discharged in 6 months? Any ideas on how to revive it?
The computer works well off the power adapter, which is a genuine Apple unit. I've tinkered with the battery connector to no avail.

System Profiler info on both batteries below:

The first screengrab (New used battery) looks like a damaged battery - note the high cycle count and the impossible capacity.
The 2nd image looks more reasonable and accourding to the figures, should still have some life left in it.
Have you reset PRAM, removed power and held power button down? I've had a few batteries that initially seem dead but come back to life.
Last edited: Sep 5, 2017
Reactions: z970mp
1

All I've done is reset the PMU and NVRAM a few times, so I'm hoping the PRAM reset might work.

I found instructions for a PRAM reset after searching the web: "Zap PRAM: reboot while holding down command, option, P, R. Keep holding them down through 3 chimes.". Are these correct?

If they are, how long should I hold down the power button after removing the power adapter and what should I do after that?

1984power said:
All I've done is reset the PMU and NVRAM a few times, so I'm hoping the PRAM reset might work.

I found instructions for a PRAM reset after searching the web: "Zap PRAM: reboot while holding down command, option, P, R. Keep holding them down through 3 chimes.". Are these correct?

If they are, how long should I hold down the power button after removing the power adapter and what should I do after that?
Click to expand...

Yes that's right. 10 seconds for holding power in then fit battery and start charging. No guarantees but worth a shot. I bought an iBook recently with a totally dead battery...but after about 8 hours of tinkering around and installing OS it sprang to life.
1

Dronecatcher said:
Yes that's right. 10 seconds for holding power in then fit battery and start charging. No guarantees but worth a shot. I bought an iBook recently with a totally dead battery...but after about 8 hours of tinkering around and installing OS it sprang to life.
Click to expand...

I have now reset the PRAM a few times. Unfortunately, both batteries still behave just as I described in my first post.

I've had this PowerBook for more than a year now, so I'm honestly giving up hope on the original battery.
Maybe it's worth it to use the new used battery for a few more hours (according to the seller it only spent 6 months out of a computer)?

This may have been a fluke chance, but my Titanium PowerBook arrived in July with a seemlingly dead battery (wouldn't charge, no signs of life). The seller noted it hadn't worked for many years.

After I did some work on the machine and replaced the HDD I put it into Target disk mode and walked away (hold T after the boot chime).

I must have accidentally left it idle in TDM for a few hours. When I returned I did the system restore/transfer and rebooted. Lo and behold the battery had a full charge and has worked (almost) perfectly since. It does drop out around 30%, but I think the readings are becoming more accurate over time.

TDM appears to run in a very low power mode. I can only assume that this lower power consumption gave the charger a chance to "deep charge" and ressurect the battery from beyond the grave.

I tried the same "trick" with my Pismo, but no luck. So as I said, maybe it was just a fluke.
Reactions: Dronecatcher

I've also had "dead" batteries in an Asus Netbook and a Toshiba Libretto - both were left unused for months and were then suddenly serviceable again.

The "new used" battery has a capacity of 65436 mAh? Must hold a charge for three full days of use!

That said, I suspect that number has something to do with a 16-bit integer representing the life, since the max there is 65,535 with 16 bits.

I've also observed the "Lazarus effect" in seemingly dead batteries, especially Pismo batteries. I've had batteries which seemed long dead and, on a whim in the last year or two, I'd put them in a Pismo with the adapter attached, and after a few minutes, sometimes even a few hours.... the sucker would suddenly start accepting and even keeping a charge. I had a long-dead Pismo battery resurrect to about 60% of its original capacity last year, and it still has that. I have no idea how that happens.
Last edited: Sep 5, 2017
Reactions: AphoticD and Dronecatcher
1

Thanks to all of you for your replies and tips. I tried @AphoticD's suggestion and left my DLSD idling on TDM for a few hours but it made no difference.

I gave up on these batteries and ordered a new third-party one. It's from the German brand MTEC and I've read a few positive things about these.
Once it arrives I'll post here about my experience with it.
1

I've had the battery for a few weeks now.

It came in a nice padded box with some instructions. 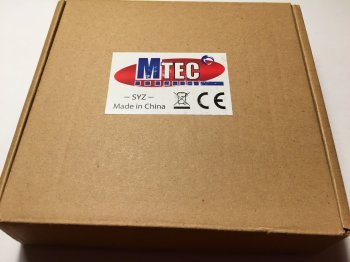 Externally, it's pretty good for a third-party battery.
Keep in mind its flaws are in the details: the aluminium on the top isn't as flush and seamless, the button doesn't sit flush with the top nor look as good as the genuine one, and it doesn't fit in the computer as nicely. 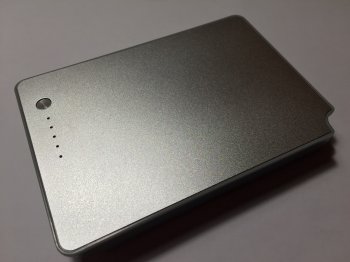 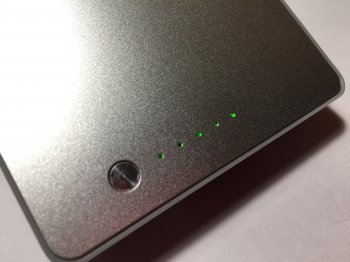 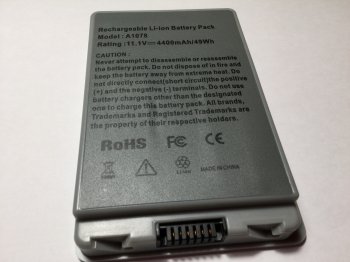 Performance-wise, I was a bit disappointed.
Not sure if I was expecting too much, but for a supposedly 4400mAh battery (just like the official one), I have only been able to get about 2 hours and 40 minutes out of it, with "Better Energy Savings" enabled.

This included about 20 minutes of sleep time and some internet browsing (using TenFourFox, a bit more intensive than say, iTunes music playback, or other task you might use your PowerBook for).


Honestly, just being able to use my DLSD without a charger is pretty great.
The best part about it is its price: 20€ including shipping from Germany (I'm in Europe), a lot cheaper than other third-party batteries (shipping is a big part of that).

I just hope it doesn't degrade fast: it came with 90% health (CoconutBattery info) and is now at 70%, but I'm not sure with trusting this data since it isn't an official battery. 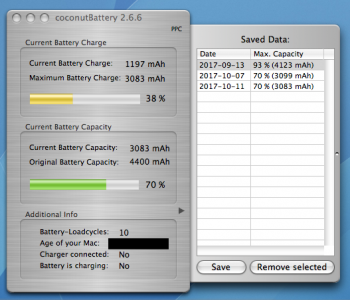 It can be a real hit and miss with reliability. I’ve bought a few eBay specials for different Macs (PB15, 2x MacBook Unibody) and they all seem to degrade quickly compared to the genuine articles.
Reactions: LightBulbFun
W

I’ve had a third party Clamshell battery exhibit the same characteristics. 100% for the first charge or so. Now will not charge past 66% or so. Apple throws firmware and stuff into its batteries that these cheapies aim to mimic but not always successfully.
You must log in or register to reply here.
Share:
Facebook Twitter Reddit Email Share Link
Register on MacRumors! This sidebar will go away, and you'll see fewer ads.
Sign Up
Top Bottom