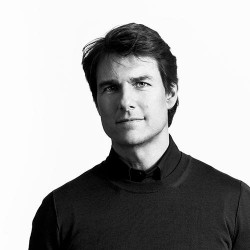 Data from the hack has been leaking out for the last several days, and as of today, new emails have been found discussing the Steve Jobs biopic that Sony was producing before it sold the film to Universal Studios.

According to leaked data shared by Ars Technica, screenwriter Aaron Sorkin, who penned the script from Walter Isaacson's Steve Jobs biography, originally had his eye on Tom Cruise to play Steve Jobs. An email from October 31 suggested Sorkin was campaigning heavily for Tom Cruise, while director Danny Boyle was concerned about the actor's age.

His emails also divulged a few details about the scenes, which cover three different Jobs product launches, suggesting Tom Cruise, at 52 is the right age for third act, while Seth Rogen, aged 32, would be the right age for the first act as Steve Wozniak.

I just got off the phone with Danny who's concerned about the age but I think I got him thinking about it and he's going to look at some scenes from Lions for Lambs where Tom's basically auditioning for Jobs. He's also concerned that the choice will be met with derision because it's such a commercial choice but I honestly think that ends up working for us. Tom's going to surprise some people and they'll want to reward that. I don't think we'd have to recast Woz. Seth's the right age in the first act and Tom's the right age in the third. And the movie announces itself pretty quickly as not being literal---as being a painting rather than a photograph. Look, I wouldn't cast Clint Eastwood but if I saw Tom Cruise flying around the backstage corridors of Symphony Hall I wouldn't think he was too old. I think it would be dazzling performance.
Click to expand...

Ultimately, director Danny Boyle dug in his heels and insisted on Michael Fassbender over Tom Cruise, with an email response to Sorkin suggesting Boyle "seemed committed" to Fassbender. Sorkin was not initially thrilled with the decision, but opted to accept Boyle's choice.

Sorkin replied, "This used to be an event. I don't know who Michael Fassbender is and the rest of the world isn't going to care. This is insane." But in the exchange that followed, he wrote, "F*** it. He's a great actor whose time has come."
Click to expand...

It's known that Sony Pictures had difficulty casting the role of Jobs, as Leonardo DiCaprio and Christian Bale were both briefly tied to the film before dropping out, but the emails also suggest that Tobey Maguire and Matthew McConaughey inquired about playing Steve Jobs before the role went to Fassbender. Tom Hanks was also reportedly interested in taking on the role of John Sculley, which is rumored to be going to Jeff Daniels.

Boyle's decision to stick with X-Men actor Michael Fassebender ultimately led to Sony's decision to drop the Steve Jobs biopic after executives struggled to secure financing for the film with Fassbender in the lead role. Boyle and producer Scott Rudin went on to ink a deal with Universal to take over the film.

That's what I said.

Honestly, I would never get past the fact that it was Tom in front of me, but I won't deny that he could do a slightly on edge crazy tone that would remind me of Steve. lol

This is turning into one hell of a soap opera.
F

Hasn't a new Apple Store opened or something?
F

I still think no one could play the late Steve Jobs like Larry David. They're remarkably similar in their mannerisms and later in life in appearance to some degree.

Having said that, I've never seen Tom Cruise in a bad movie or act badlywhatever his personal neuroses, they translate well on screen.

Just make a behind the scenes documentary on trying to get this project off the ground. So far that seems more interesting the film itself.

How many more signs are needed.....

Time to let this project go.

Maybe pick it up later, but the interest is not there for another Jobs movie right now.

MOTHERF***ER I've been campaigning for Tom Cruise since Day 1, and now I hear Danny Boyle's forcing the choice of Fassbender over him? For God's sake, get Fincher reattached, give him what he wants (he earned it after the financial success of Gone Girl), and ATTACH TOM CRUISE.

I think it needs to be said that Tobey Maguire would have ruined the non-existent-yet movie.

He's about as bland as bland can be.

KdParker said:
Maybe pick it up later
Click to expand...

Agreed. Nine or ten decades should be enough.
T

"Sorkin replied, "This used to be an event. I don't know who Michael Fassbender is and the rest of the world isn't going to care. This is insane." But in the exchange that followed, he wrote, **** it. He's a great actor whose time has come.""

So, I guess we can use the **** word now? Because Sorkin is ****ing egotistical. This movie represnts the epitome of Fassbender's career? What an insult to Fassbender.
C

longofest said:
This is turning into one hell of a soap opera.
Click to expand...

I can see the pre-production drama in the "making of" section of the DVD for this film.


chirpie said:
Honestly, I would never get past the fact that it was Tom in front of me, but I won't deny that he could do a slightly on edge crazy tone that would remind me of Steve. lol
Click to expand...

I cannot see Tom as Steve. However, I was not able to see Tom as Lestat either and he pull that one off.

On that, one of favorite quote from James Woods.

Jack Crow: You ever seen a vampire?
Father Adam Guiteau: No I haven't.
Jack Crow: No? Well first of all, they're not romantic. It's not like they're a bunch of ****in' fags hoppin' around in rented formal wear and seducing everybody in sight with cheesy Euro-trash accents, all right? Forget whatever you've seen in the movies: they don't turn into bats, crosses don't work, and garlic? You wanna try garlic? You could stand there with garlic around your neck and one of these buggers will bend you ****ing over and take a walk up your estrada chocolata while he is suckin' the blood outta your neck.

enough with these stories

Just what we need, a Church of Scientology nut job playing Steve Jobs.

swingerofbirch said:
I still think no one could play the late Steve Jobs like Larry David.
Click to expand...

I'm not sure if it's a compliment to someone's acting skills to say that they would be great to play the late Steve Jobs...

I only like Tom Cruise in movies where he's a villain or a slime ball, ie Interview with a Vampire, Tropic Thunder. I don't think he'd be a good Jobs. Besides, I really don't think there needs to be another Jobs movie, Noah Wyle nailed it in The Pirates of Silicone Valley.
You must log in or register to reply here.
Share:
Facebook Twitter Reddit Email Link
Top Bottom