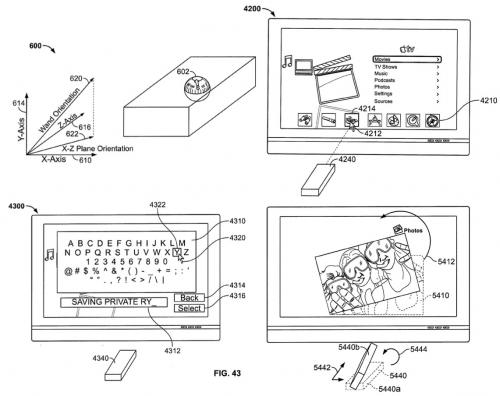 Apple updated an existing patent application today that describes the implementation of a "Magic Wand" remote control to provide a more natural control experience when navigating a product like the Apple TV. Readers will recognize that many of the described technologies work like the Nintendo Wiimote. Similarly, Apple describes the use of a accelerometers as well as fixed points of reference to determine the movement of the remote. Other patent applications in the past have shown us more of this research coming out of Apple.

Naturally, the use of this "Magic Wand" could be used to browse media, fast forward/rewind, rotate images and even zoom in and out by moving the wand closer or further from the screen.

We don't necessarily think Apple would introduce a standalone Wii-like remote system, though there have always been persistent rumors of a much enhanced version of an Apple remote control. Apple has already integrated some advanced remote control features into an iPhone App that takes advantage of gestures and accelerometer controls.

Nice to see that they're still thinking about the

Not sure I'd want this device though. Since the 'Remote App' came out for the iPod/iPhone I've be as happy as a pig in...
Comment

Oh lord. We had people complaining about "Magic Slate" (not that it's official) and how Disney it sounded and here is another magic device, haha. Let the complaining continue!


Can we at least wait until it's released to complain?
Comment
L

So are going to see a slew of new 'Magic' items from Apple now?
Comment

The 'Magic' prefix seems more like an internal codename for related projects.

The remote, the supposed tablet, etc. It kinda fits into a concept of a next generation home/mobile integration 'lifestyle' (always hated that as a buzzword) system.

Then again some of this stuff probably predates other bits. A lot of it could have a decade or more between them, thus rendering it all meaningless.
Comment
M

They have used magic for a mouse, it wouldn't surprise me if they used the 'Magic' term for input devices. Mice, wands, multi touch keyboards when they arrive.
Comment

Isnt this just a software update to the Remote app?

As far as I know the Remote app does not yet incorporate accelerometer controls. Rotating, lifting and lowering should be easily incorporated.
Comment

apple is leaving the "i" prefix for "Magic" LOL
Comment

I don't like this "magic" naming trend, but I'm sure due to marketing efforts I soon will...

This isn't a little like the wiimote, i'd say it IS the wiimote... which make you wonder... can

Could such an interface open the Apple TV up to it own app store?
Comment
T

This could be coming out quite soon!

Rumors are flying and I am super excited!
Comment

I don't care what they call it, as long as it makes my

Apple seems to recently like using the 'Magic' prefix on product names. If it improves the user expeerience, I really don't care what they call it. Apple has to protect its patents and its technology from other companies who love to fight Apple with patent lawsuits...
Comment
S

Sorry guys, "Magic" isn't an official name for this. It's just refered to as a "remote wand" in the patent application. People just had previously dubbed in the "Magic wand"

Nice way of ripping off the Wii controller
Comment
J

MikeDTyke said:
They have used magic for a mouse, it wouldn't surprise me if they used the 'Magic' term for input devices. Mice, wands, multi touch keyboards when they arrive.
Click to expand...

And the one before it was the 'Mighty' mouse... I don't recall any other Apple products with a 'Mighty' prefix.

Apple haven't released anything other than the mouse with the word Magic in the name and until they do I don't think these reports mean anything. An updated patent would not include a proposed name for the device so it can only be somebody making it up.
Comment
S

Smacky said:
Nice way of ripping off the Wii controller
Click to expand...

If Apple releases this device the perception here will be Nintendo stole Apple's idea.
Comment

With this new Wii style remote, could we finally be seeing video games on the

I am glad to they are thinking still about that Apple tv. I think they should partner with their buddies Samsung or Sony and integrate Apple TV in it. Or they can put expand their LCD and LED panels with ATSC tuners and Apple TV built in. It is only $200 more hardware to build in and I think a lot of people would prefer to get away with one extra device and power cord (probably the only gleaming white one in their entertainment console)
Comment

I'd rather have no remote at all! I like what I have seen with Microsoft's Natal project. Could make things more like the displays used in the movie Minority Report.
Comment
Y