Late last month, we reported that we had received word of tightening MacBook Pro supplies, suggesting that an update to Apple's popular notebook line might be coming in the near future.

[center][img]http://images.macrumor...t_buy_notebook_3_11_11_500.jpg[/img][/center]​
Also getting attention today is a Best Buy inventory screen pointing to a March 11th in-stock date for what may be a revised version of the entry-level 13-inch MacBook Pro. We received word of the same database entry about ten days ago, but have little faith in its accuracy, as the company did the exact same thing in early 2010, guessing at a March 14th date for new models. The update didn't actually occur until a month after the proposed date. 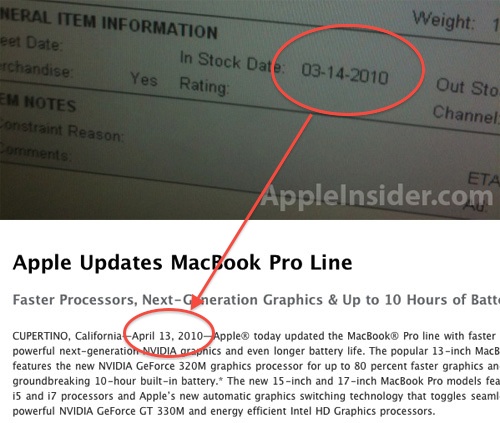 Best Buy's predicted date from 2010​
The other wildcard in the MacBook Pro update situation is Intel's "design error" that has forced the company to fix its manufacturing process for one of the chips in the chipset being used the Sandy Bridge processors presumably destined for the next-generation MacBook Pros and iMacs. A delay in availability of Sandy Bridge chipsets could easily push back MacBook Pro updates from Apple's original target date and result in an extended period of tight supplies of the current models.

Too bad I won't be buying one.

March really is the earliest given the Sandy Bridge delay. April wouldn't surprise me given that supply has to have time to ramp up.

I have a feeling Apple will be having an event in March, not for the iPad, but for Mac OS X Lion. They will definitely be releasing a developer preview in March/April since they are shooting for Summer release.

Anyway, this Lion developer preview event would be the best place to announce the updated MacBooks!

So it looks like most likely the next MBP's are going to be dual cores and not Quad Cores? Maybe we'll see the quad option in the BTO's.
M

With the new rumor of Apple going fully digital I'm expecting a drop in the optical drive which could mean discrete graphics in the 13".

Is this really front page news? I mean this was a rumor... about a mac?

I hope its not a redesign. My 2008 unibody is still holding up well.
H

What kind of graphic card in 13 inch?

Are these models going to have SSD inside?

Somehow I just don't think so. Maybe an iPad intro.. but not MBPs IMO
R

Too bad I can't afford one. Stupid VeriPhone.

syan48306 said:
So it looks like most likely the next MBP's are going to be dual cores and not Quad Cores? Maybe we'll see the quad option in the BTO's.
Click to expand...

Nope, TDP is 10W higher. Probably won't see quad cores until Ivy Bridge at the earliest. Haswell will probably be when we see quad core notebooks from Apple as standard in any sense of the word.

Yes. They're showing the predicted 2010 stock date to show that it correctly predicted the 2010 refresh a month ahead of time.


hcho3 said:
What kind of graphic card in 13 inch?

Are these models going to have SSD inside?
Click to expand...

Similar to the graphics in the current 13 inch most likely. Yes, SSD will be a BTO option just as it has been.
D

Closely following this thread
Thanks for the post! Keeps the hopes up

Need to ditch the optical drive and switch to SSD in all lines, then make the battery larger and the laptop thinner. That would be a rather worthwhile update.

Oh, and maybe discrete graphics in the 13" to make up for the fact that the Sandy Bridge GPU is rather bleh.

I'll be excited no matter which one they announce. Ive been holding off buying a Macbook and an iPad because an update is due. Either way it will be fun to hear the official specs on both machines.

basesloaded190 said:
i think they were showing how last year when BB put in dates on their system they were close to the actual release date
Click to expand...

I think we were showing that they were not close to the actual release date.
D

I worked for Best Buy as a inventory spec. You can NEVER trust RSS...
T

Let me guess: No quad-core?

Let me guess: No quad-core? Again?

Fanboys care more about form factor and showing off the thinness of their laptops at Starbucks, but for those of us professionals who need portable computing power, it is obvious that the "Pro" in "MacBook Pro" is a misnomer.

Shame on Apple for neglecting its professional user base. Give me a bulky and ugly-looking laptop (with OS X) instead of a thin, shiny, and fashionable-looking laptop anyday. When the hell did computing start being about fashion and status symbols instead of using the most powerful components available?
A

Wow, that'll be almost a year since the last update. Which is when I bought mine. Even though I won't be getting one (probably) I look forward to seeing what they release. Will it be a speed bump, or a revolutionary redesign.