At least one case maker is expecting Apple Pencil support for the upcoming 2019 iPhones, despite no solid rumors suggesting the new devices will work with the Apple Pencil.

Case site Mobile Fun is, as of this morning, stocking an "iPhone 11 Pro" case from Olixar with a built-in mini Apple Pencil holder. The case maker seems to believe Apple is designing a smaller version of the Apple Pencil that will work with at least the larger 6.5-inch iPhone XS Max successor. 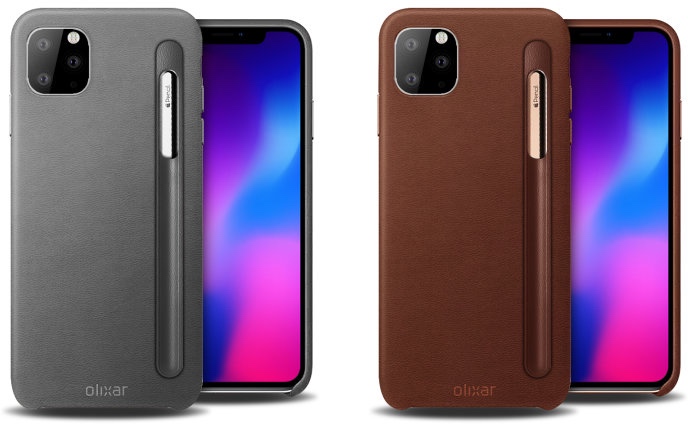 The case in question is a rendering, not a real case, and it therefore doesn't offer concrete evidence that Apple is planning to introduce Apple Pencil support for the 2019 iPhone lineup. It's not even clear if Olixar has actually manufactured these cases, especially because the Apple Pencil sleeve on the back doesn't look functional. From the accessory's description:

Crafted from premium genuine leather, this exquisite grey case from Olixar for the iPhone 11 Pro provides stunning style and prestigious protection for your phone in a slim and sleek package, with the added convenience of an Apple Pencil sleeve.
Click to expand...

There have been some rumors and analyst predictions hinting at Apple Pencil support, but thus far we've heard nothing from a reliable source.

Were Apple indeed developing a miniature version of the Apple Pencil that works with the 2019 iPhone, it's likely we would have heard more about it by this point given the detailed rumors we've heard about other aspects of the 2019 iPhone lineup.

That said, Korean site The Investor said in 2017 that Apple would introduce Apple Pencil support for iPhone as soon as 2019, and recently, Citi Research listed the Apple Pencil as one prospective feature for the new devices.

Many times, early case designs for upcoming iPhones are accurate because there's a lot of money in being first to design a case for a new device, but in this situation, Olixar may just be aiming to draw eyes to its brand name using a case rendering for a feature that's interesting, but likely not coming.

For details on all of the features we do expect in the 2019 iPhone lineup, such as triple-lens cameras, bilateral wireless charging, larger batteries, and more, make sure to check out our 2019 iPhone roundup.

Most likely just hedging their bets. Pretty appalling design solution even if it is true
Reactions: iSilas, filmbuff, ignatius345 and 3 others
B

johnyslats said:
Most likely just hedging their bets. Pretty appalling design solution even if is true
Click to expand...

I don't mind the case colors, though. Honestly, the giant camera-noma looks fine in those renders.
Reactions: AngerDanger, SDJim, Internet Enzyme and 1 other person

Looks like they took Samsungs iPad Pro clone, and shrank it down.
Reactions: MickeyAlexander and ignatius345
R

Swinging for the fences.
Reactions: Internet Enzyme and johnyslats

If pencil support came with new iPhones, I'd be here for it, though.
Reactions: RabbitLuvr and Oohara
Y

Reactions: javen, Someyoungguy, sugarbear and 34 others

Olixar is the same company that pre-sold SE2 cases in 2018. That story last year earned them a lot of free clicks.

It's a cheap marketing stunt for them to produce these renders. If they thought it was real, the company would bet money and show real production cases in hand.
Reactions: SEmAN, imola.zhp, ZZ9pluralZalpha and 6 others

Despite the infamous Steve Jobs quote from the original iPhone unveiling, that was over twelve years ago and the times have changed. Pen support is everywhere now for phones, tablets, and laptops, and Apple has to stay competitive. And this would also make sense for them from a marketing perspective because it sells their ecosystem even more. I would imagine they'll utilize the same Pencil support in the current iPad Pros and just make a smaller Pencil to go with the iPhone, and then make the two interchangeable. I can see all the promos now: "Started jotting down an idea on your iPhone only for it to grow out of proportion? Easily pick up where you left off on the bigger canvas of the iPad!"

However, charging it is another question completely... No way they'll have room inside the phone to store it like the Galaxy Note, but I can't see them going with the magnetic attachment on the side either. It's Apple so I'm sure they will come up with something clever, but my mind is racing with the different possibilities.
Reactions: Tom_Aatje, RabbitLuvr, profmatt and 5 others

That was 12 years ago! Things have moved on a lot since then.If Jobs was still around, i doubt that he would be stuck in the past.Now is the time for Apple Pencil support.
Reactions: Tom_Aatje, RabbitLuvr, Breaking Good and 5 others

Makes me wonder... When fans and suppliers start swinging for the fences with ideas like this, I wonder how much attention Apples gives it. At one time I could see Apple purposely ignore a good idea because they didn't come up with it. But that was when Apple excelled at giving us products we didn't know we needed. Anymore, it feels like they are mostly following the heard.

Anyway, I still miss Graffiti on my Handspring. Still think I could write faster that way than I can type on my iPhone. A stylus might bring that back!
Reactions: im2fast4u
D

Pencil for a phone that is perfectly cut and designed for finger use? a phone????
A

So it’s a stylus then... the one thing Jobs hated, so Apple could do a complete 360 and utterly copy Samsung... what innovation they don’t have.. if this is true.
Reactions: groove-agent
J

jacks64 said:
That was 12 years ago! Things have moved on a lot since then.If Jobs was still around, i doubt that he would be stuck in the past.Now is the time for Apple Pencil support.
Click to expand...

And, that was from a guy whose job it was to sell against competing products with styluses. Of course he's gonna bag on what the competition is doing.
Reactions: Tom_Aatje, artfossil and sickoagb

This is laughably artificial. And of course these types of things surface weeks right before the iPhone keynote, just enough to gain some ‘notoriety’ for the case maker. Typical stunt that happens every year about this time. Nothing to see here.
Reactions: imola.zhp
S

apolloa said:
So it’s a stylus then... the one thing Jobs hated, so Apple could do a complete 360 and utterly copy Samsung... what innovation they don’t have.. if this is true.
Click to expand...

Really isn't the same thing because you don't use the Apple Pencil to navigate the UI and do everything, its an accessory mostly for drawling. What Steve was talking about there was a stylus used to navigate the UI.
Reactions: CarlJ, Mainsail, Oblivious.Robot and 8 others

Apple Pencil is not a stylus. It’s a drawing/writing tool which you don’t need to operate the iPhone or iPad.
Reactions: RabbitLuvr, CarlJ, MarkB786 and 9 others

apolloa said:
So it’s a stylus then... the one thing Jobs hated, so Apple could do a complete 360 and utterly copy Samsung... what innovation they don’t have.. if this is true.
Click to expand...

Wow, we're not even on the second page of comments and already we have a bunch of clueless posts taking a single Steve Jobs quote completely out of context and repeating the same garbage. Rinse & repeat.
Reactions: brinary001, Smici, profmatt and 14 others

“Nobody wants a stylus, we have ten!”

Just finished Walter Isaacson’s wonderful SJ biography last night. Steve said it himself after appointing Tim Cook (to COO?), before his health was in a truly desperate state, that Cook was “not a product person.” Everyone was creating fragmented computing experiences in the 90s but Apple was the “experience innovator” in the personal computing space, and Steve did it by creating amazingly beautiful and simple hardware (and the software that made the hardware magical). That culture doesn’t exist anymore under Cook. It’s why Jony left. It’s why Apple doesn’t release innovative hardware anymore. Without SJ’s return in 1997 Apple could never have gotten back to “the intersection of technology and liberal arts,” and they never will again. It’s not Apple’s fault. Steve brought the juice, and once the juice had been brought it can’t be forgot.