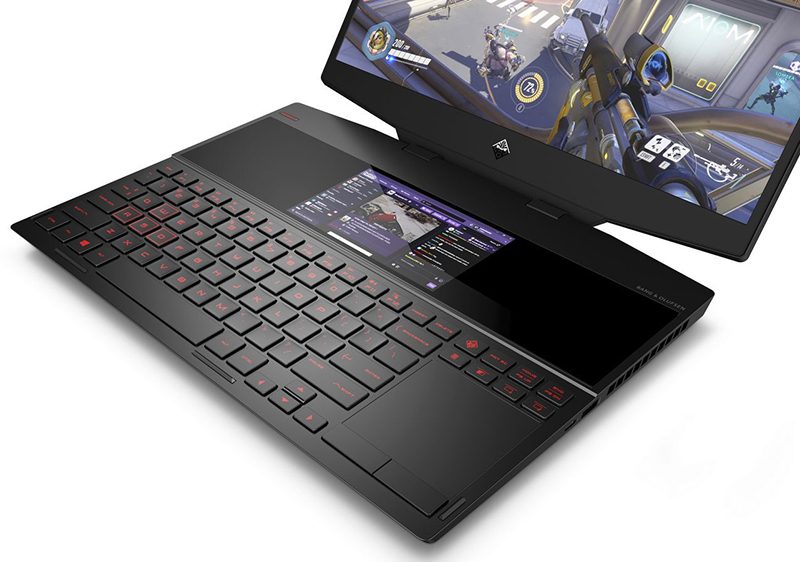 Like the Touch Bar on recent MacBook Pro models, the second screen on the OMEN X 2S is designed for multitasking. For instance, while gaming, players could use the screen to message teammates in Discord, browse music on Spotify, or stream Twitch or YouTube, complete with support for dedicated hotkeys.

One compromise of the second screen is that the trackpad is positioned to the right of the keyboard, rather than in a center position, but HP believes that most gamers would prefer using their own mice, according to Engadget. 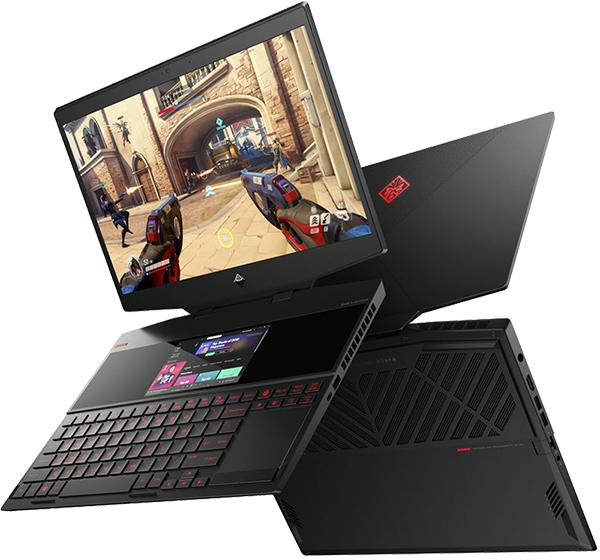 As far as specs go, the OMEN X 2S is equipped with up to a ninth-generation Intel Core i9 processor, up to NVIDIA GeForce RTX 2080 graphics, up to 2TB of SSD storage, and up to 32GB of DDR4 RAM. The notebook uses an advanced thermal solution with three-sided venting to enable five-way airflow.

The notebook is 20mm thick with a full metal chassis, but weight and battery life have yet to be disclosed. HP expects the OMEN X 2S to be available by June, with a starting price of $2,100 in the United States.

Well, the concept is interesting, and I don't game enough to know if this is valuable ... but ... if I needed an extra 6" screen, would I just use my phone or iPad? That feels better and more useful.
Reactions: eduardoregueiracampos, xnu, mentaluproar and 4 others
D

That trackpad looks like a delightful experience waiting to happen.
Reactions: eduardoregueiracampos, JetLaw, eltoslightfoot and 4 others
R

Because one thing hard-core gamers (the target customers for these machines) have yearned for is the ability to play Spotify and stream YouTube videos while fully concentrating on mowing down their opponents?
Reactions: dysamoria, Crow T Robot, navaira and 1 other person

This seems so useless I don't even know where to start. Complexity precedes simplicity, it doesn't follow it.
Reactions: dysamoria, chabig, eduardoregueiracampos and 13 others

to the horribly ugly level.
Reactions: iEdd, dysamoria, chabig and 8 others

It will be long before keyboard area will be all touch screen, all purely customizable for whatever need.

to break in 9 months
Reactions: mentaluproar

Wow, I can't imagine anyone is wanting this.
Reactions: dysamoria, chabig, PictorGuy and 1 other person

What a piece of junk.
Reactions: dysamoria, cbaca51 and radiology
A

Serious question, who does hardcore gaming on a laptop?

Wouldn’t it be better to build your own rig at a fraction of a cost?
Reactions: dysamoria, AnonMac50 and JetLaw

Neat but who else is cringing at the hinge?
Reactions: dysamoria

alexandr said:
to the horribly ugly level.
Click to expand...

It is but the concept is amazing. Makes the touch bar seem very poor.
Reactions: jezbd1997

Because comparing Apple's **** implementation to a legic second screen makes sense. I'm not sure why you even bother to try and make the touchbar look good, MR.

Plenty of PC gamers use a 2nd screen for YouTube or Spotify; this is an obvious feature to add.

I can't think of any professional users who ever went "Hey, I know, lets get rid of the [ESC] key!"
Reactions: dysamoria, Queen6, The Captain and 9 others

Someone tell apple and HP that those overpriced screens are WORTHLESS and most ppl don't care!
I'm tired of the foolishnovative designs apple has made in the last years.

I want a nice computer with no compromises which means: NO MACS at all.
Reactions: frankfenn and Digital Dude

ramallite said:
Because one thing hard-core gamers (the target customers for these machines) have yearned for is the ability to play Spotify and stream YouTube videos while fully concentrating on mowing down their opponents?
Click to expand...

You have not met my son, he's got three monitors, the middle one is the game, the left is you tube and the right is chat of some description.
Reactions: afir93, jedifaka, TomaxXamot and 4 others
M

dogslobber said:
It is but the concept is amazing. Makes the touch bar seem very poor.
Click to expand...

i agree, but it's very poor as is - apple is not working with it at all, at least they haven't in a while.

ramallite said:
Because one thing hard-core gamers (the target customers for these machines) have yearned for is the ability to play Spotify and stream YouTube videos while fully concentrating on mowing down their opponents?
Click to expand...

People already do that. And besides, a lot of gamers have a desktop PC with dual monitors. This is for the gamers who want the dual setup, but at the same time want a laptop.
Reactions: afir93, jedifaka, TomaxXamot and 2 others

madrag said:
What about the left-handed?
Click to expand...

Based on the article, they don't seem to think a lot of people will use the trackpad and will instead use their own pointing device. Of the ones that do use it, they are assuming most will be right handed, which may be true, but sucks for those that are lefty's.
Reactions: rjohnstone

Pretty slick for a gaming laptop.
This is obviously not intended for the average user.

The keyboard customizations and system monitoring on the smaller screen is nice.
https://www8.hp.com/us/en/gaming/laptops/omen-x-2s-15.html
Reactions: afir93, TomaxXamot, Stella and 1 other person
You must log in or register to reply here.