OK! I will try to do it tomorrow and achieve my goal !!!

Hi! I tried all the connection options and it did not work. (((

TheSufle said:
Hi! I tried all the connection options and it did not work. (((
Click to expand...

Hey, outstanding work! Here is an observation I wanted to share with you with my fan speeds on my Mac since my power cable mod (Pixlas mod on Mac Pro 5.1)
It seems that apple regulates fan speeds based on power draw, (either voltage or amps) and not really based on temperature sensors. Let’s assume for a moment this is the same case with your iMac, -your fan would stay on Full blast because of twice the power draw because of the second added fan.

If you want to have the original fan speed situation I think you have two Options:
#1
The power for the second fan has to come from a different location to run, but gets regulated by the first fan sensor cable (maybe the third cable off the fan plug) This way the combined Sensor cable would only get the power read of the original fan, because the second add on fan gets the voltage / amps from a different Outlet on the mainboard.

Question remains wher to find an alternative spot for getting power to the second fan that is not monitored on power draw. Maybe someone else here with more iMac Know-How can chip in.

#2
Slow down or throttle down both fan speeds because of an additional adjustable resistor / potentiometer / poti to get more grip on this issue and burn up excess power on that resistor to get slow dual fan speeds.

AlexMaximus Thank you for your suggestions!

I thought a day ago that if I use 12v from sata cable?

What do you think about this?

I thought a day ago that if I use 12v from sata cable?

What do you think about this?
Click to expand...

If the voltage works out, this might work. (Didn't know SATA runs on 12Volt)
However, I did check out my preferred mod site and found this sata crimp plug here. You might be able to use this to harvest the power you need for the fan with some self configurated plugs and wirings for this project.

Yes!!! It worked, the temperature with dual fans is 5 degrees lower!!!
Reactions: AfroUSA 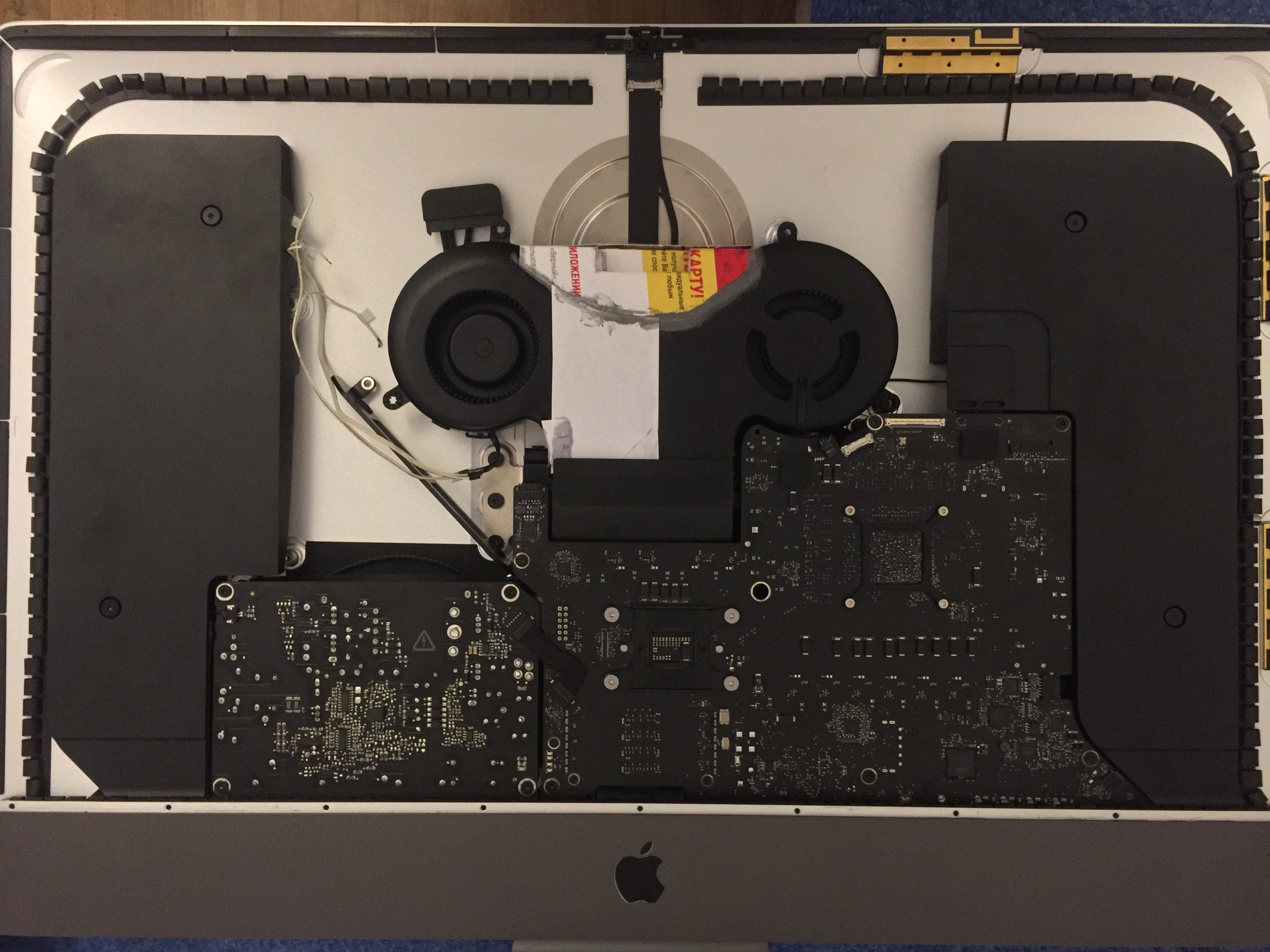 TheSufle said:
It remains to glue and paint everything to make it look whole

Depending on the need to attach the new fan element to the iMac chassis, an Epoxy material used for car body work might be suitable.

You are the Referenz now when it comes to a functional dual fan upgrade on the iMac.
A true geek success. Congratulations!

Thanks!. In imac pro, the cooling system works 80% better, so let mine work the same way )))

PS: It's a revolution, Johnny!

HI! 610-0145 and 610-0216 are identical, the power I took from the owc thermal sensor,or use the extension cable shown above to not damage the imac wire. the yellow wire 12V and the black wire are the first and second wires of the fan

No matter what hdd or ssd is set!

What exactly do you want to hear on the video?

The fan is not finished yet, in the process of grinding and painting

PS: Ask me questions, as everything will be ready, any tests
[doublepost=1551085929][/doublepost]Consider only one thing: the left fan will have to cut off half the case, since it will have a bend in the other direction!
Plus you will need to make a hole there is a mount

This is insane and totally awesome @AfroUSA

At the least, I'm going to have to try reapplying the thermal paste on my Mac Mini at some point in the future.

HI! new modding! added two radiators to the video card, let's see what the temperature will be!

TheSufle said:
HI! new modding! added two radiators to the video card, let's see what the temperature will be!
Click to expand...

I love this thread. It makes me so sad I sold mine though...

Seriously though, hats off to @TheSufle and @AfroUSA for building the 2014 Retina iMacs Apple should have built us in 2014. I'm pretty sure I'd still have mine if it had been built to anywhere near these standards...
Reactions: AfroUSA

The difference is about 4-6 degrees in a simple,yet results only after modding

unfortunately, the processor heatsink is too small to make an additional mod, I will look for ways to better cool the processor, be sure to unsubscribe in my branch, but for now I'm going on vacation
Last edited: Aug 2, 2019

My son's 2015 5k iMac used to overheat a lot, usually when watching Netflix and then bringing up any sort of screen overlay. The GPU would shoot up to 110 degrees and machine would just turn off. It was generally running hot, with the fan always at 80% or higher.

No amount of sucking or blowing at the vents on the case would really fix this, so a few months back I bit the bullet, bought a screen sticky tape kit and opened the iMac for a good clean and re-grease. The original thermal compound was all dry and brittle, I replaced it with Arctic Ceramique 2. Also cleaned all vents, fins and the fan. The machine runs very cool now, the fan is inaudible most of the time. No more shutdowns due to overheating.

It's a pity that Apple still uses cheap thermal compound (I had to regrease all of my MacBook Pros after 3 years or so) and makes this sort of cleaning and service difficult. I liked it a lot better when the iMac screens were attached with magnets...
Reactions: AfroUSA, AlexMaximus and TheSufle

The difference is about 4-6 degrees in a simple,yet results only after modding

unfortunately, the processor heatsink is too small to make an additional mod, I will look for ways to better cool the processor, be sure to unsubscribe in my branch, but for now I'm going on vacation
Click to expand...

Looking back on your really outstanding dual fan upgrade, there is one question that I wanted to ask you.
Assuming one has a suitable 3D Printer, do you think it would be feasible to print a dual fan case from scratch, knowing what you know.
Of course this would imply that those fans are somehow bolted/screwed/glued down in its (usually) single fan casing. I really enjoyed modding my old Mac Pro and I am looking to replicate your outstanding modding result on a 2017 iMac. At the moment I wrestle with myself to throw in my hat for one of those machines down below.

Do you think a dual case fan could be printed with one of those or is it an engineer's wet dream?

Tell me what you think. Autodesk was just kind enough to get me a free Fusion360 Student license for my Mac. Given enough time, I am sure it should be realistic to make a CAD drawing on Fusion360 for this dual fan upgrade of yours. A used iMac fan from eBay is on its way. Happy Holiday !!
Last edited: Aug 5, 2019

You can try it, I would like to see it here!double fan will give you 2-4 degree difference.Affects the airflow, not the number of fans, it is better to look for a way to increase the radiators, this is their most problematic area and there will be more effect

Haswell is the hottest line of processors

The CPU radiator is too small,that's what you need to work with!

TheSufle said:
The CPU radiator is too small,that's what you need to work with!
Click to expand...

You are completely spot on, it's indeed the radiator. They are nowhere near to be big enough to handle large concurrent heat loads. I still have a XBOX 360 that I did mod with a real large Thermaltake heat-pipe-upgrade to prevent the red ring of death. This was really a game changer, - because of this my xbox 360 did never die.
The thing is.. I can do a dual Dremel-Fan-Mod, - heck I could even imaging to do a more professional 3D print for the dual fan case, - but I can't do a metal print with an upgraded heat pipe prototype. The iMac fan will be here next week. Let me get a closer look and go from there.

Due to the thickness of the case, a large radiator will not fit in the imac, the graphics card is next to the mount of the imac leg, all the main heat comes from the processor with its small radiator

this form is approximately needed for the processor

TheSufle said:
Due to the thickness of the case, a large radiator will not fit in the imac, the graphics card is next to the mount of the imac leg, all the main heat comes from the processor with its small radiator

this form is approximately needed for the processor
Click to expand...

Thanks. Researching the Radiator topic I have found this inexpensive U-shaped heat pipe, that could be used as an add on for the existing radiator. This might be worth a shot. Off-course this means to put the radiator into the airflow at the end of the cooler exhaust, so further moving would be required.
Not sure this will fit, but there are tons of heat pipe manufacturers out there that wait to be part of a early prototype..