Here is an iMac G3 Graphite 600 MHz model from Summer 2001. The CRT screen has some significantly noticeable discoloration, and the entire right portion of the screen has a green tint and is darker than the other half of the screen. The image also doesn't seem to fill the entire display, creating some unusual black bars on the sides.

Does anyone know how to fix this kind of problem? Will degaussing the CRT restore the screen back to normal, or does this requires taking the iMac apart or replacing the whole screen? If anyone knows how to fix this for cheap and without messing too much with the internals, I would really like to know.

Thanks a lot everyone! 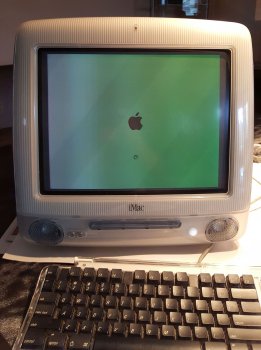 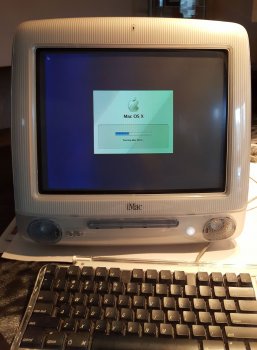 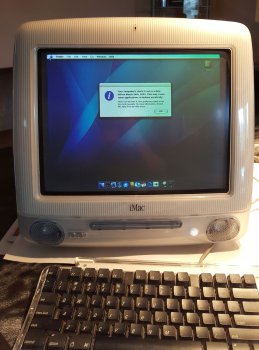 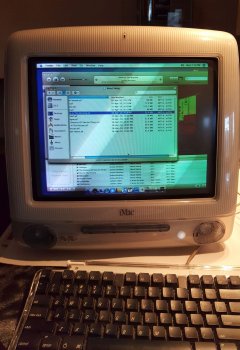 I had the same (not that bad but very similar) with my 1Ghz eMac. There are many tricks and recommendations in the web but the one thing that helped me came from my granddad. Just use it Unplug it, press the powerbutton for some seconds and then leave it unplugged for a day or so to make sure all capacitors are unloaded. After that just use it. Instead of screensaver better turn of the monitor. Some days later it recalibrated (degaussed) properly and the colours are now as they are supposed to be. Heck I can even do photoshop with it now
Three more things:
I recommend using the Adobe RGB (1998) colour profile.
To get rid of the black bars you have to calibrate the monitor using 'geometry' in the Monitor section in system preferences.
Do not try to degauss it manually if you have no experience with CRTs - it's way too easy to do stupid things to a CRT. If my method doesn't help you may give it to a local repair shop or ask them for advice if they can't do it.
Good luck!
Reactions: bobesch, AppleAsker, CooperBox and 1 other person

Ultimately, a problem like this is GENERALLY caused by a distortion in the magnetic fields that direct the electrons to the phosphors in the screen.

Like most reasonably modern CRTs, the iMac will automatically degauss every time it powers up or wakes from sleep. There should also be a "degauss" button under system preferences->displays. Try hitting that a few times.

Degaussing will take care of it if the issue is the shadow mask being magnetized. If it's especially bad, it may need to be externally degaussed. As mentioned above, this can make things worse if you're not careful. I usually use a soldering gun that I start a few inches from the screen and move it back.

You might also just pick a good screensaver, set the computer to not sleep, and leave it on for a few days.

Unfortunately, mechanical damage can also cause this. A year or two back, I bought a 17" ADC CRT from a seller on the LEM Swap. They sent me photos right before they packed it up, and it looked great. Unfortunately, UPS managed to do a number on it, and when it arrived it had a terrible green shift in one corner. No amount of manual degaussing fixed it, nor did leaving it on for two days. After I had the insurance check from UPS, I played with it a bit and finally figured out that one of the alignment magnets on the side of the tube had come loose. I got it reasonably back into line with refrigerator magnets, but it wouldn't stay. UPS came around asking about it a month later, so I just boxed it up and gave it to them.

I hate to paint a grim picture, but unfortunately I've found that sometimes CRTs are just beyond saving. I had a 21" SGI-branded Trinitron at work(with 13W3 and VGA in) that I tried like heck to say. It was dim and off color(it reminded me of some of my relatives) but also had uneven color across it. I tried boosting the B+ to try and get it into range to work with other aspects of it, but that didn't help appreciably. I reluctantly sent that one to surplus for recycling.
Reactions: AppleAsker, LightBulbFun and amagichnich
You must log in or register to reply here.