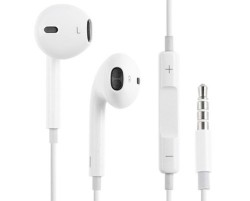 Apple's iPhone 7 and iPhone 7 Plus will be manufactured without a 3.5mm headphone jack, leading to speculation about the accessories that will be included alongside the two devices.

Lightning-equipped EarPods and wireless EarPods are two rumors that have been bandied about, but a new report from Japanese site Mac Otakara suggests Apple may ship the iPhone 7 with standard 3.5mm headphones and a 3.5mm jack to Lightning adapter to allow them to connect to the new devices.

Mac Otakara's information comes from sources at Computex Taipei 2016 and the reliability of those sources cannot be confirmed. Shipping EarPods with a 3.5mm jack included seems like an unusual choice for Apple, even if an adapter is included in the box.

At Computex Taipei 2016, many manufacturers showcased their new Lightning audio adaptors, and it seems there has been rumors that the headphones to be included with the new iPhone 7 series will still come with its own headphone jack as usual, and that a Lightning headphone jack adaptor will also be included in the package.
Click to expand...

Past rumors, including one from Mac Otakara itself, have suggested Apple will introduce a new EarPods design that connects to the iPhone via Lightning or Bluetooth, something that would better ease the transition away from the 3.5mm jack than an adapter. We've only heard a few rumors about the EarPods, though, so Apple's exact plans remain unclear.

Mac Otakara's report also reiterates claims 256GB of storage will be an option and suggests the iPhone 7 will feature speaker holes on both the right and left sides of the Lightning port, filling the space left by the headphone jack. Rather than introducing stereo sound, the site believes the two speakers will be "on a monaural system."

Rumors about the fate of the space left by the removal of the headphone jack have been mixed. Early rumors pointed towards two speakers for stereo sound, but later rumors and design schematics have cast some doubt on whether the iPhone 7 will feature dual speakers.

A lot of the information we're hearing about the iPhone 7 is mixed, making it difficult to narrow down the exact features we can expect to see, but the removal of the headphone jack is one of the most consistent rumors we've seen about the device. Other expected features include an iPhone 6s-style design with relocated antenna bands, faster LTE and Wi-Fi, a more water resistant casing, and dual cameras for the larger iPhone 7 Plus.

And with that, circling the wagons is now complete. At this point, whether the phone ships with 3.5mm headphones or Lightning headphones, we'll be sure to hear how reliable these sources are because they got it right.
Reactions: Jamalien, arkitect, Orka and 10 others
Comment

For God's sake why not just ship with Wireless headphones
Reactions: Lopov Jack, kyleh22, Spendlove and 11 others
Comment
S

Sounds too sloppy for apple, don't believe it
Reactions: Lopov Jack, MarkIII, Howyalikdemapls and 45 others
Comment

simbo123 said:
Sounds too sloppy for apple, don't believe it
Click to expand...

White and sloppy and still gets tangled in your hair...
Reactions: cmichaelb and ChemistCody
Comment

Where are my bluetooth AirPods? :'(
Reactions: kyleh22, Spendlove, scapegoat81 and 1 other person
Comment

This has to be false.

thats an awful user experience. At least ship with headphones with a lightning adapter.

Given the length of the 3.5mm jack, this will not exactly be a small adapter. Perfect for carrying the phone in ones pocket....better get AppleCare for the broken lightning ports
Last edited: Jun 20, 2016
Reactions: Howyalikdemapls, milo, mkeeley and 5 others
Comment

I would not mind this sort of adapter. I would love a non-bluetooth way to connect my iphone to my car's stereo and to charge it with one cable.
Reactions: StoneJack and Urban Joe
Comment
B

Dilster3k said:
Where are my bluetooth AirPods? :'(
Click to expand...

They'll probably launch as a new accessory that we can pay extra for.
Reactions: Jamalien, arkitect, Rastapopoulos and 8 others
Comment

Now all we need is some 'analyst' to come out and say they will not be including earphones at all. The circle then would be complete.
Reactions: Wonderboyf1, VulchR, zemsantos and 1 other person
Comment
C

This would be pretty lame and cheap of them. I mean consumers give Apple like $500 pure profit these days for an iPhone, you can't tell me Apple can't afford to put a slightly more expensive set of earphones with new adapter on it.

However I can easily see this if Apple also releases new ridiculously expensive wireless earbuds as an option. Why put any more money into the accessories that come with the iPhone when they can sell $300 wireless earbuds most people will probably buy anyways.
Reactions: mkeeley, Waxhead138, ohio.emt and 3 others
Comment

Hmm would have figured they ship a standard EarPods with it then charge $14.99 for the Lightning to headphone jack adapter. Here's to new innovation, but still starting at 16GB!
Reactions: AppleScruff1
Comment
B

This is an appropriate comment in late September if Apple actually did what this rumor suggests.
Reactions: karthik2809, aamoren3 and duervo
Comment
Y

Traditionally, when Apple leans into adopting or killing tech, it leans into it hard. It's historically taken a hard-line approach to eliminating what it thinks are outdated features. Either you adapt to Apple's new standard or you find yourself a new device.

If Apple does eliminate the 3.5mm jack, I cannot imagine the iPhone 7 shipping with an adapter. I would anticipate that Apple would instead ship lightning earbuds. If you want an adapter, you pay for an adapter. That's how Apple has done things for just about its entire history and I can't imagine them doing anything different this time around.
Last edited: Jun 24, 2016
Reactions: jrbdmb, Howyalikdemapls, Shadow Runner and 18 others
Comment

Because then people would bitch that they have to buy an adapter to use the headphones that they want. The only way to make people happy would be to ship both bluetooth AND an adapter, which would be expensive.
Reactions: Xultar
Comment

If a headphone jack doesn't exist on an iPhone 7, Apple won't ship headphones with that type of connection. That makes no sense.

Now if they could only design them to stay in your ear
Reactions: Smartass, 12vElectronics, drumcat and 5 others
Comment

This elimination of 3.5 inch headphone jack if true is the WORST stupid idea ever.
there is zero benefit,or maybe just doing radial changes no matter what means innovation now?
this and the supid 2 lens camera concept..laughable stupid ideas..
WTF?
Last edited: Jun 21, 2016
Reactions: milo, BulkSlash, studio¹³¹ and 4 others
Comment

Apple philosophy consists in 1) Beauty and simpleness. 2) Charging $40 for non-included adapters.
This is not gonna happen.
Reactions: ReneR
Comment
T

Because Tim Cook fancies the Beats Headphones he isn't Steve Jobs who was about consumers not just about cash but what would get customers into buying a Apple product. And I agree if the idea is to kill off wired headphones and go wireless why don't they just make Apple wireless headphones it is pretty used for working out and taking phone calls but I hate wired during working out.


As I said Tim Cook hasn't really brought anything new or fresh look at Boses new headphones it is Wireless, Noise Cancelling and can take phone calls could Beats headphones that are wireless have noise cancelling? Last I asked a Apple employee no it does not.
Reactions: American Hero
Comment

I hope this is the case, adapter included in the box FREE.
Reactions: doelcm82
Comment