Last year we found some great information that the 32GB models had awful write speeds. Let's do the same test again this year.

Along with your results please post a screenshot, the phone (8, 8 Plus, X), and capacity.

Does anyone have the 8/8 Plus they can test?

thank you, also looking to compare the storage improvements. (if there is any)

please post the data from the iphone 7 in the OP so we can have a visible comparison.
D

iPhone 8 Plus 64GB - Write 175MByte/sec - Read 1114MByte/sec
I've been looking for this data daily. Was tortured over the notion that the 256GB is faster. Must have the fastest option!.

According to "PerformanceTest Mobile" (free) by PassMark Software Inc 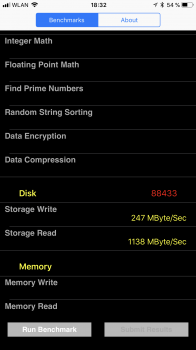 Ran the PerformanceTest Mobile benchmark on my iPhone 8 Plus, 256 GB. Disk results were:

Ever since getting my (16GB) iPhone 3GS in 2009 and running into storage issues, I learned to not get the base model. Always go for the "next step up". So, my iPhone 4S was the 32GB model, my iPhone 5S was the 32GB model, and my iPhone 6S is the 64GB model.
The iPhone 7 starting at 32GB shook things up, a bit. Suddenly, base model wasn't that bad. I would have still gone for the 128GB model, just in case.

Things have changed more drastically with the iPhone 8. Not only is 64GB now the base model, but the "next step up" is now priced higher. You have to pay $850 to go to the next step up for the iPhone (compared to just $750 previous years).

This has made the 64GB model that much more attractive. I ordered the iPhone 8 Plus (256 GB) when they went on sale. However, I just don't like the larger size. I figured I could drop down to the physically smaller iPhone 8, and even back down to 64 GB. BUT - at the same time I don't want to end up with an iPhone 8 that has slower "base model" 64 GB storage than my "upgraded" 64 GB iPhone 6S. So, I've been trying to find storage performance information, which lead me to this thread.

When testing with "PerformanceTest" from the App Store (free), its readings (write & read) sometimes varied greatly. It seems to write very little data for its tests, and it may not be the best for a good analysis.
https://itunes.apple.com/us/app/performancetest-mobile/id494438360

When testing with "Phone Doctor Plus" from the App Store (99¢), its readings were WAY off (it said it was writing at over 10GB/sec). I didn't even bother writing down its scores, since they were wildly inaccurate.

I also tried "DiskBench" from the App Store (99¢). It seems to actually be designed specifically for running a storage benchmark, but its results always started low for me, but then seemed to increase on each run, up until around the 10th run (at which point they then began to look similar to what "PerformanceTest" was showing). I don't know if this is an issue with iOS 11.
https://itunes.apple.com/us/app/diskbench/id1166519285

Basically, to get the most consistent scores, you may want to run DiskBench at least TEN TIMES.

I'm NOT a fan of these I/O testing apps. Since different apps produce very different results, I question the numbers that have already been posted here. I got my results after many, many benchmarks - after noticing that simply "running the app" wasn't enough to give a good idea of storage performance.

For comparison, my older device:

I could see the 32GB option last year being a smidge slower but I highly doubt that there would be a statistically significant difference between the 64GB and 256GB this year. Personally, I went with the 64GB 8+ as it was the cheaper option and I think it is SUPER fast.

Just got a different phone.

It looks like the 64GB model may have write speeds half that of the 256GB model. 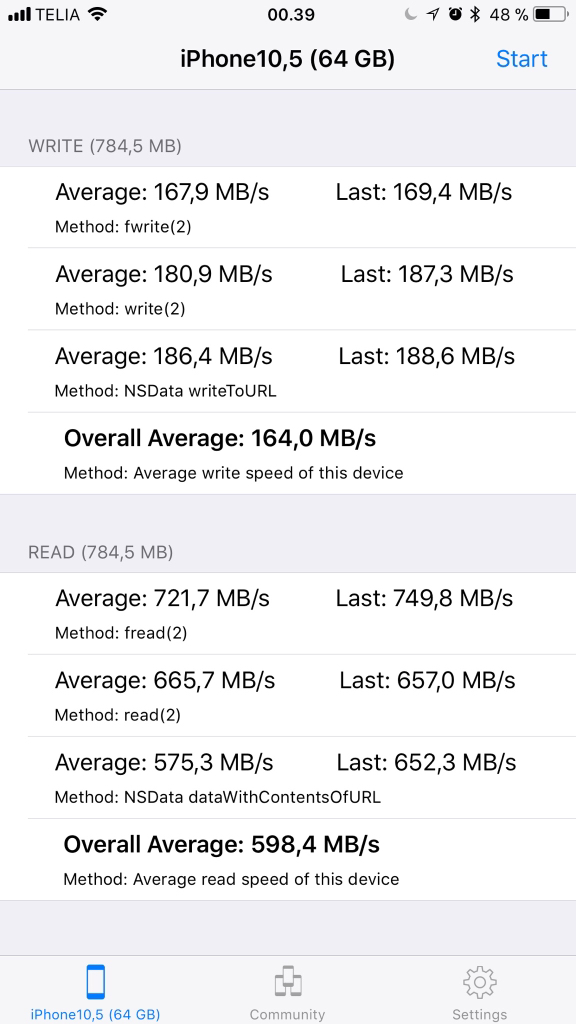 this is with diskbench iP8+ 64 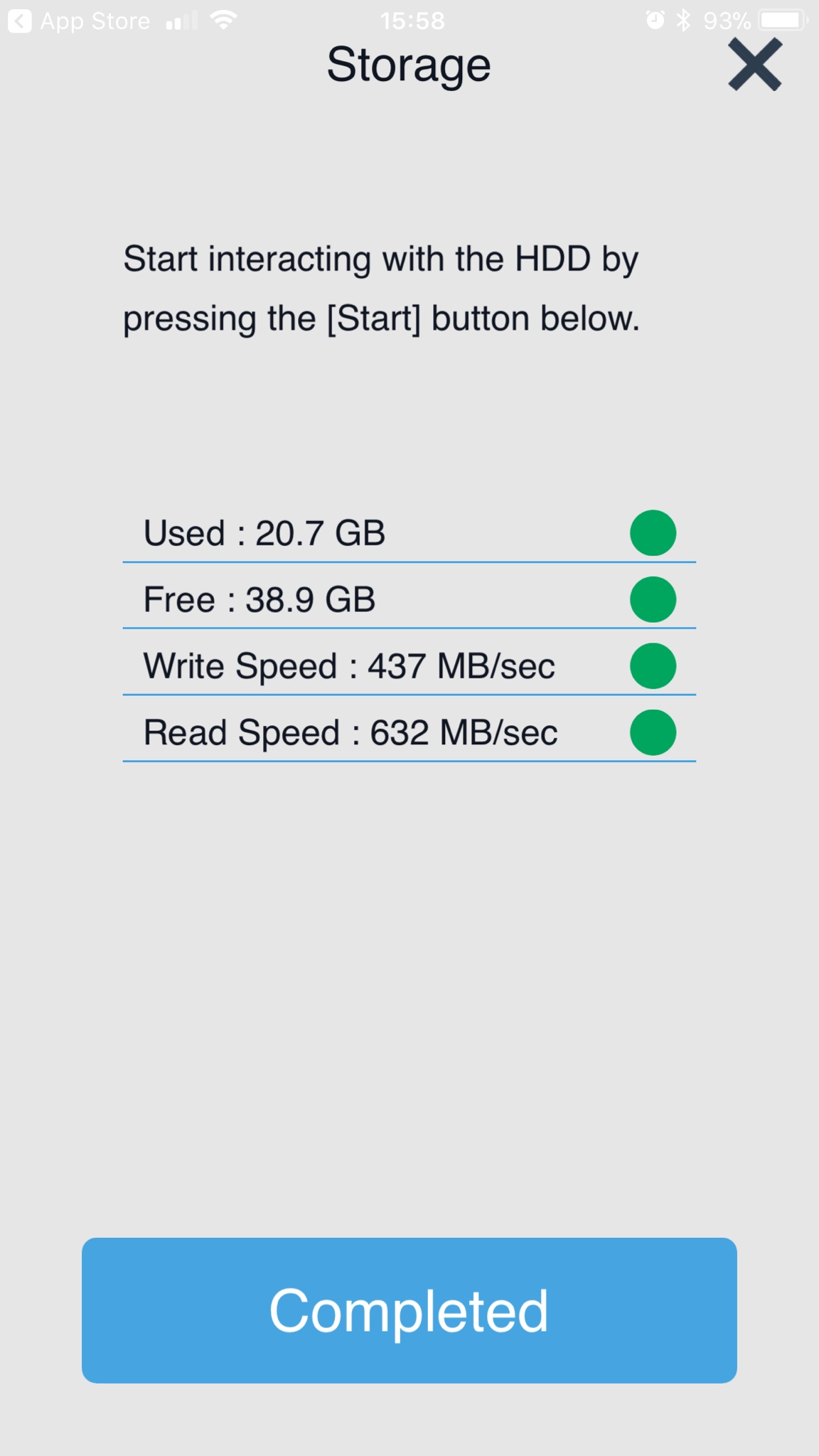 oplix said:
the difference of write speed between the 64gb and 256gb models is highly irrelevant
Click to expand...

Wouldn't installing and updating apps be quicker if write speeds are quicker?

At the sort of speeds we are seeing above, even for the slower capacities, this is way more than enough for the average size and type of applications you will ever use on an iphone. Unless you're doing some serious 4K edits with lots of effects/filters on your iphone, these speeds are plenty plenty. Besides if your a serious video editor you wouldn't be doing large scale edits on your phone anyway.

You wont notice the speed difference in installing and updating an average sized app say less than 300MB in size at any of these speeds above because all of them are reading and writing at greater 200-300MB per second anyway.

This is of course different in a desktop/laptop environment where you have "full fat" applications that are greater in size and provide more features and functionality, and speed does matter then especially when your doing 4K edits.
Reactions: nephron8 and BigMcGuire
P

I wonder why the difference in speed. Does Apple actually use slower chips on the lower storage tier, or does the higher storage tier have some sort of “RAID-0” like setup/data channels? Seriously asking out of curiousity.

pika2000 said:
I wonder why the difference in speed. Does Apple actually use slower chips on the lower storage tier, or does the higher storage tier have some sort of “RAID-0” like setup/data channels? Seriously asking out of curiousity.
Click to expand...