MacRumors has received word that a listing for the Mac Box Set version of OS X 10.6 Snow Leopard briefly appeared in Apple's online store earlier today. While the page, which listed the box set as shipping within 24 hours, is no longer available on Apple's site, an entry for it is retrieved in Google searches for the product number, MC209Z/A.

The Mac Box Set bundles Mac OS X with iLife '09 and iWork '09. A Leopard version was launched in late January at a price of $169, and a similar version will be available for Snow Leopard at the same price point. Apple has noted that the box set will be required for users looking to upgrade from OS X 10.4 Tiger to Snow Leopard, as the standalone OS X Snow Leopard, priced at $29, will require an existing installation of OS X 10.5 Leopard.

The brief appearance of the Snow Leopard Mac Box Set provides further evidence that the launch of Apple's new operating system is rapidly approaching. Snow Leopard Build 10A432 was reportedly designated the "Golden Master" version to be sent to manufacturing for the public release, and several sources have also claimed that Apple may be releasing Snow Leopard as early as Friday, August 28th, ahead of Apple's previously-announced September launch window. Over the weekend, purported photos of the Snow Leopard packaging also surfaced, indicating that manufacturing has indeed begun.

Maybe we *will* see Snow Leopard before the end of the month.
Comment
S

Uh ohs...
Apple slips again, luckly not for long
That reminds me of the time where they posted the G5 specs on the G4 tower prior to release...
Comment

Although I don't personally believe SL will arrive before the last week of September, I'd be thrilled with a late August release!
Comment

No one knows yet. I think you will be able to use the disc without leopard and they moved the Erase and Install option to disc utility to discourage "upgrading" from Tiger. But really no one knows at this point, or at least no one that would tell us.
Comment
S

I wiped my HD completely and installed Snow Leopard.

So no, you don't have to install Leopard first.
Comment

Was anyone able to buy it while it was up?
Comment

already ordered and paid $15 for mine from apple, i get it the release day!!
Comment

I did a clean Leopard install (Erase and Install) and just dragged the files and folders I needed back.

I got over 60GB back from junk I didn't know where clogging my HDD and also junk I never needed but I was lazy to manually delete.

All this to have a good start from Snow Leopard.
Comment
T

I really think there will be a release next week.
Comment

Nope iLife is never included in the OS releases, its only included on new computers.
Comment

Gives a lot of credence to 10A432 as the GM release.
Comment

Apple was probably figuring how to set up SL for pre-order.
Comment

Damn I got a paid Pre-order on Amazon! Oh well!
Comment

iLife is not released as part of the operating system. iLife is a separate suite of applications that comes preinstalled on computers so it is "free" with all Macs, but it is NOT part of the OS. When the OS is upgraded, or when iLife is upgraded, you must purchase them independently if you wish to upgrade.
Comment
5

Now THAT's a stunning package for SL...nothing like an Apple Refurb box to make our eyes feel better..!
Comment
J

while I'd definitely be glad to see Snow Leopard become available before the end of the month, Apple still have the statement "Coming September 2009 with every new Mac" listed on the main page... my guess is that this means it will come pre-installed on new Macs starting in September, but that doesn't necessarily rule out an early release for just the operating system alone. either way I'm looking forward to it!
Comment

Still no "official" word on the box-art, obviously... 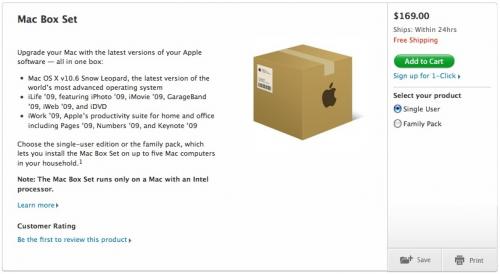 I just checked my pre-order status on the UK Apple Store and noticed this:

It said ships within 24hrs!!

Now that that's over, seems, someone slipped during the daily updates to the site.
Comment

Jaik said:
I just checked my pre-order status on the UK Apple Store and noticed this:

My order has said the same for the past week or more....
Comment
D