With the release of OS X Lion, Apple updated their licensing agreement to allow the virtualization of Mac OS X under programs such as VMWare Fusion and Parallels. This functionality allows you to deploy different sandboxed installations of OS X on a single machine. The change, however, appeared to only apply to OS X Lion and not to previous non-server versions of Mac OS X such as Leopard and Snow Leopard.

So, when the Lion optimized version of VMWare Fusion was released, it allowed users to run additional virtualized copies of OS X Lion, but continued to prohibit running older versions of Mac OS X under Lion.

Those rules seem to have changed a bit in the latest version of VMWare 4.1 which was released on Friday. As first noted by Macworld, VMWare's Fusion no longer strictly prohibits the virtualization of client editions of Mac OS X Leopard and Snow Leopard.

The change in support, however, is a bit subtle. Instead of prohibiting the use of non-server Snow Leopard and Leopard, VMWare prompts the user to verify that they are licensed to run such copies: 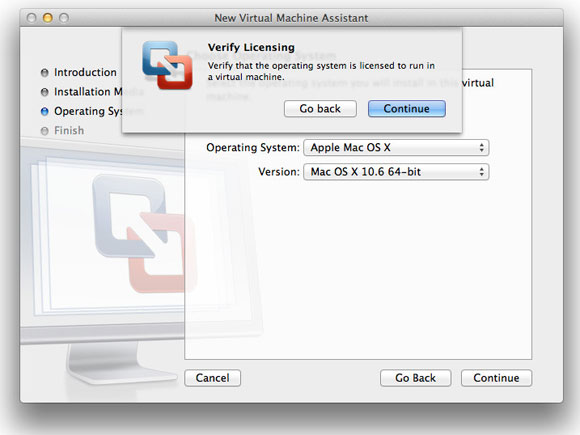 Macworld's Jason Snell confirmed that simply agreeing allowed him to to install and run non-server Mac OS X Snow Leopard and Leopard under Lion. Now, whether end users actually have such a license is less certain. When questioned by Macworld, Apple simply reiterated that virtualization is allowed for Mac OS X Lion, Snow Leopard Server and Leopard Server.

Update: VMware has noted that the Snow Leopard and Leopard client virtualization was made possible by an omission of a server edition check from the new Fusion 4.1 software. WMware will be releasing an update to address the issue.

Smart move if they want Mac OS X Server to be taken seriously in the future. I would say at least half of the servers I work with are virtualized. Also, when writing server side software, we almost always get a VM image that we use rather than fussing with setting up a local machine.

Now I can finally use my two Canon printers that only work with 10.6.
Comment
L

This is great. I just hope that Apple doesn't force them to pull this feature at some point.
Comment

Haha kids! Rosetta support is mine once again!
Comment
S

Nice. So now I can have Lion, Snow Leopard and 7 Ultimate on the same computer. I hope it comes to Parallels too soon.
Comment
N

So does this mean I can finally upgrade to Lion and just run my Adobe Creative Suite apps in Snow Leopard virtualized?

Incompatibility with Adobe apps is the only thing keeping me from upgrading to Lion right now.
Comment
P

Will this software allow me to

Greetings everyone. I just noticed this post in my Google Reader--serendipitous!

Will this software allow me to run a program that only runs on Leopard (not Snow Leopard!) with Lion? I have program vital to my livelihood that is now ten years old, but has no substitute.
Comment
M

Why not allow previous version to be run on other inferior OS?

PPC forever! Glad to see that PPC apps can be run in Lion now.
Comment
P

Forgive me for possibly being lazy, but what does this software cost?
Comment


ParisParamus said:
Forgive me for possibly being lazy, but what does this software cost?
Click to expand... 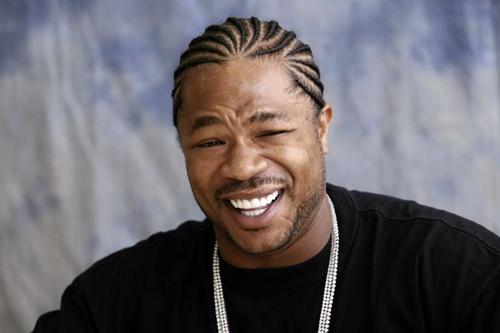 You probably could, but the performance would be awful
Comment


ParisParamus said:
Greetings everyone. I just noticed this post in my Google Reader--serendipitous!

Will this software allow me to run a program that only runs on Leopard (not Snow Leopard!) with Lion? I have program vital to my livelihood that is now ten years old, but has no substitute.
Click to expand...

ParisParamus said:
Forgive me for possibly being lazy, but what does this software cost?
Click to expand...

Around $50. VirtualBox is free, and I am successfully running Snow Leopard virtual under Lion with VirtualBox.
Comment
C

I wonder how good performance really is when running Rosetta translation on top of a VM? Although I suppose unless you are planning on running a PPC game or heavy non-Universal Photoshop use performance isn't that critical.
Comment
T

Now I can finally use my two Canon printers that only work with 10.6.
Click to expand...

Now if only more people would use such licensing check methods...

Attempt to play an old iTunes song that still has FairPlay, for example, and rather than have to figure out which iTunes account it was downloaded with, just click the "Yep, I'm authorized to listen to this." button.

Oooh! This could be used instead of passwords, too!

Slide to Unlock your iPhone and instead of a keypad, it simply says "Please verify you're allowed to use this iPhone."

And for getting into and starting cars!

"Please verify you're allowed to drive me."

This is big news. It will let more people upgrade to lion as well.
Comment
K

Let's see if Apple turns a blind eye to this or asks VMWare to remove it. If they do the former, it could help spur adoption of Lion since people who need Quicken 2007 or another PowerPC application could still go ahead and purchase Lion or a new Mac.
Comment
R

TheZA said:
Around $50. VirtualBox is free, and I am successfully running Snow Leopard virtual under Lion with VirtualBox.
Click to expand...

So now I can buy a MacBook Air, run SL under VirtualBox, and ignore Lion's abyssmal user interface and auto-save? Kewl!
Comment
D

I can install snow leopard, but NOT leopard, it fails part way through.

coder12 said:
Haha kids! Rosetta support is mine once again!
Click to expand...