It appears that Apple iPhone displays are going up at Apple Stores. TUAW notes that a "large, covered rectangular display" appeared at the 5th Avenue Apple Store tonight. 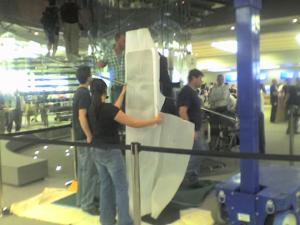 They posted a small gallery of images of the shrouded display.

We'd heard rumors that Apple Stores would be getting more promotional displays this Friday, and there had been hopes that iPhone rate plans details would also be announced at that time.

Staring at a Mac Screen

Looks bigger than in the tv ads....
Comment
K 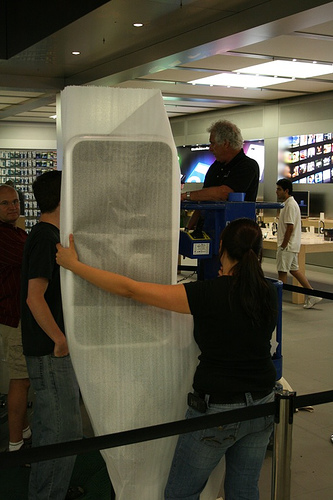 is that a tv screen inside the gigantic iPhone.....i'm guessing they just play videos of the iphones features....pretty cool
Comment
S

how do you fit that iphone in your pocket?
Comment
H

2nd gen already?? Does it do flash?
Reactions: xalea
Comment

Might have to pay my local Apple store a visit tomorrow to check this thing out.
Comment
S

I'm hoping it's in the front window displays where it will have room to automagically rotate into a landscape view while showing off all the features of the iPhone.
Comment

Well I hope that they have one at my local Apple Store in Arden fair tomarrow, since I am going there and I would love to play around with an iPhone, if there is and we don't have any pics of the displays yet I'll try to get some up.
Comment

Don't tell me they are going to have a huge multi-touch screen for display... That would be freakin' awesome! I know I'm dreaming, though.
Comment

This one must be for Andre 'The Giant'
Comment
Z

That iPhone is huge!

Good looking out arn/MacRumors! You were right about the promotional displays, now lets hope for those data plans to be released today!
Comment
J

In case anyone's wondering, the caption on the flickr photo in French means:

After speaking with the gentleman on the left in the photo (presumably the Apple employee wearing black), there was no possibility of removing the paper from the giant iPhone (for the purpose of getting a better look).
Comment

www.tuaw.com said:
Andrew asked one of the employes how the iPhone sales would work at the store. She told him that they would not be activating the phones at the store itself. This is pretty much in line with what I heard when I called my local Apple store earlier this evening. My Apple sales person was refreshingly honest. Not only did she admit that no one at the store had a clue about how things would work regarding sales, initial stock numbers, restocking, and so forth, but also that she had no idea as to when they would receive their training. She did add that she (and others at the store) were under the impression that the phone would probably have to be taken over to an AT&T store for activation, but she also claimed that you'd need a two-year commitment, an item that I know is up in dispute and a fact that Apple employees are not yet clear on. If the no-activation-at-store bit proves true, then might it be possible to buy an iPhone at an Apple store and then just insert a SIM card and go?
Click to expand...

I doubt Apple will have you take it to an AT&T store to activate it. That seems ridiculous.
Comment
J

re the possibility of inserting a SIM card:

I'm not yet certain that there'll be customer access to the SIM card at all. Especially given the fact that the battery is not removable.

The fact that the phone will be SIM locked to AT&T/Cingular is pretty much granted, but I'd not be surprised if it turned out that there was no way to even access the SIM card within.
Comment

I think this is the model they intend to sell to people worried about the accuracy of the touchscreen keyboard.
Comment

j763 said:
I'm not yet certain that there'll be customer access to the SIM card at all. Especially given the fact that the battery is not removable.
Click to expand...

Didn't they show the SIM slot in the keynote?
Comment
J

mrkramer said:
Didn't they show the SIM slot in the keynote?
Click to expand...

yes... I was mistaken. <a href="http://www.blogsmithmedia.com/www.engadget.com/media/2007/01/apple-iphone-49.jpg">This photo</a> clearly shows that it does have a SIM slot.

Hmm.... if they haven't locked it to Cingular/AT&T in the firmware, I'd actually consider buying one. I need to be able to throw my SFR sim card in when I go to Europe.
Comment
J

All you folks with your comments about the giant phone and how it won't fit in your pocket: har-de-har-har. Laugh it up.

I, personally, am thrilled at this look at not only a regular-sized iPhone, but also the Apple Elves who make it! Now, I always thought the Apple Elves were smaller than this. Maybe these are the "giants" of the Apple Elf factory.
Comment
P

don't get too excited guys... I heard these may just be big promotional displays. no actual iphones to play with. we'll see come morning.