Apple has not yet officially released the final version 2.0 Firmware for original iPhone owners just yet, but the App Store does appear to have gone live, and now appears as a link in the iTunes Store. Based on some early experiences with the App Store, we've consolidated these notes and observations about the App Store.

Screenshots can be taken by everyone running Firmware 2.0. By simply holding down the home button and the on/off button simultaneously, you will see a "flash" of white appear on the screen, and a screenshot will have been saved to your Photo roll. Simply syncing your photos to iPhoto will transfer them to your computer. Some forum members have taken advantage of this feature to create a screenshot thread in our App Store forum where they are collecting screenshots from various applications. Additional screenshots are also available at Ars Technica, OrchardSpy, Engadget. 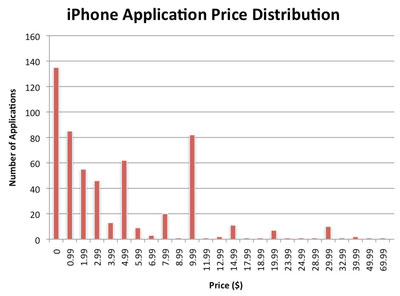 Graph from PinchMedia
The pricing of iTunes Applications will likely remain in flux as the market establishes itself. ReadWriteWeb points us to the above graph by PinchMedia which breaks down how iTunes Apps are being priced at this time. There are clear spikes at Free, $4.99 and $9.99, but there are a number of apps that fall under the $4.99 price.

What's most interesting, however, is Phill Ryu's observation that every iTunes App publishes their download stats on their info page as seen on the iPhone. For example, AOL's free AIM client has already logged over 12,000 downloads:

Now, when we look at an application, such as Super Monkey Ball, we see it has attracted 3927 customers at $9.99/download. This means they've netted $27462 so far today after Apple's 30% cut. Hard to draw too many conclusions, especially since the App Store only officially launched this moment, and the official 2.0 Firmware has not been released. This, however, will be an interesting number to watch over time. Meanwhile, less publicized apps have only seen downloads in the double digits so far.

Methinks I'd better think up an iPhone App to cash in on this..... and fast!
Comment
A

"As a result the only people buying apps are the ones who followed these instructions to install the Firmware early."

Maybe I am exception, but I dont even have an iPhone yet. I have an iPod touch, but am downloading all the apps I want before the servers get hammered.
Comment

I think natural price reductions will come. The most interesting thing for me is the info on easy screenshots
Comment

Slightly surprised more people haven't bought the anatomy app yet. I realize it's pricey but medical people are used to this as books can cost us a fortune. That and it seems like a very well done app. With it being demo'ed in the video I thought that would perk more interest.

Clearly Apple has changed the "delivery" game with the iTunes App Store.
Comment

It would be the new DS + PSP
Comment
A

the comment you made about people needing to install firmware before buying apps is incorrect. You don't even need an iphone to use itunes to buy apps from the store.
Comment
Y

Is the picture taking of the apps just for the iphone or can you do that on the ipod touch also?
Comment

I think the med app cost 40...this is crazy...I can't wait for tomorrow...the App store is going to crash...just like mobileme
Comment

I find it interesting that there's three "flashlight" apps that are attempting to charge $1. (There is one free one, and Erica's flashlight app for jailbroken 1.x phones.) There's also an app that's charging for the same functionality (as far as I can tell) as Apple's calculator in iPhone software 2.0.
Comment

If Apple were to truly be the forward-thinking company with it's customers, vs profit, in mind, they'd end this ridiculous, insulting and annoying 0.99 thing, and just round it to a nice simple buck, or two.

(yes, I know, all companies want profit, but some do so by treating their customers with respect)

((yes, i also know the developers set the price, but Apple could have put on a better example.))

$40, what about the $70 Application for Pilots under the Travel section? I guess if you're a pilot that's a good deal, but wow...
Comment

I have found that several apps are not available to Canadian iTunes Store users, AOL Radio and the Google app to amongst them. Is this temporary or are the apps going to be limited distribution by country.

As for someone comments about the $40 app. It is a professional grade flight information app used by pilots around the world.
Comment

williej81 said:
$40, what about the $70 Application for Pilots under the Travel section? I guess if you're a pilot that's a good deal, but wow...
Click to expand...

That app is pretty darn nice! And will save me a boatload of time. I plan to buy that tomorrow when the firmware comes out. It's a really nice app if you are a pilot!
Comment
X

geezle27 said:
I have found that several apps are not available to Canadian iTunes Store users, AOL Radio and the Google app to amongst them. Is this temporary or are the apps going to be limited distribution by country.

As for someone comments about the $40 app. It is a professional grade flight information app used by pilots around the world.
Click to expand...

Don't worry I am guessing that those apps are not showing up because it is taking a while to propagate to the local canadian servers. I cannot for the life of me think why there would be a country border limit on application sales??
Comment

gah! when do we get 2.0 for the touch darnit!
Comment
G

geezle27 said:
I have found that several apps are not available to Canadian iTunes Store users, AOL Radio and the Google app to amongst them. Is this temporary or are the apps going to be limited distribution by country.
Click to expand...

It seems different countries have different Apps. The AOL Radio is not available in Europe either, and I can't find a Google one, so presume it isn't.

There do seem to be some European ones - 105 Radio (Italian) and a couple of Monte Carlo Radio ones.

The prices seem higher than being reported. eg the My Life Record Family edition is $60 (£29.99), the Netters Anatomy Flash cards is almost $50 (£23.99), and there are quite a few others in that price region.
Comment